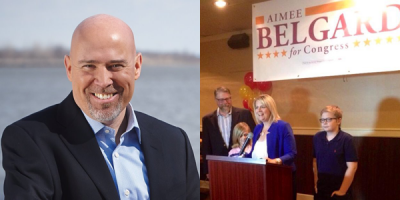 Demographics and historical trends in New Jersey’s third congressional district may be on the side of Republican candidate Tom MacArthur, but a poll out Monday from the Stockton College of New Jersey Polling Institute shows he and Democrat Aimee Belgard tied in the race which will determine the successor to Rep. Jon Runyan (R).

The poll of 606 likely third district voters found that MacArthur and Belgard each have 42.2 percent support of those surveyed. Undecideds made up 12.8 percent. The balance, 2.9 percent, indicated they supported someone else, “nobody,” or refused to answer. Pollsters called both landline and mobile numbers between Sept. 12 and 14, the college said in a statement.

“A congressional race this close will continue to draw national attention to New Jersey,” said Daniel J. Douglas, director of the William J. Hughes Center for Public Policy at Stockton. “The candidates will be fighting over a relatively small number of undecided voters from now to Election Day.”


Both sides have stepped up airings of a steady stream of attack ads in recent days. A Belgard ad funded by the Democratic Congressional Campaign Committee takes aim at MacArthur’s background in the insurance industry and allegations a company with which he was affiliated short-changed victims of Hurricane Katrina in 2005. MacArthur’s latest round of ads calls Belgard, a sitting Burlington County freeholder, a “liar.” The ads show Belgard holding up a legal pad with a number zero written on it, saying she never took a salary or raised taxes. A voiceover narration then disputes those claims.

The district includes portions of Burlington and Ocean counties, including all of Brick Township. Cherry Hill, a Democratic-leaning town, was dropped in favor of Brick, which traditionally leans Republican in federal and state elections, in redistricting after the 2010 census was completed.

Belgard lives in Edgewater Park. MacArthur is a former mayor of Randolph Township, Morris County, who maintains a residence in Barnegat Light, which is part of the second congressional district.

According to the Stockton poll, each candidate is stronger in his or her own geographic base, with Belgard leading with 45 percent to MacArthur’s 39 percent in Burlington County and MacArthur leading in Ocean County, 47 percent to 38 percent.