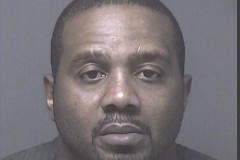 Toms River police seized 635 doses of a heroin marketed to users as “Ebola” from a suspected local drug dealer earlier this week.

On Monday, the Toms River Police Department Special Enforcement Team executed a search warrant at the Ramada Inn at 2373 Route 9 with the target of the investigation being Barnabas Davis, also known as “Hammer,” police spokesman Ralph Stocco said.

The search warrant was obtained during an ongoing investigation into the distribution of heroin from the rear suites of the Ramada Inn along with information received from the Lakewood Township Police Department’s Street Crimes Unit, according to Stocco. Upon the execution of the warrant, Davis, 47, whose last known address is the Briar Knolls condominium complex in Toms River, was placed under arrest after approximately 633 wax folds containing heroin and approximately 40 grams of crack cocaine were seized.

The heroin, Stocco said, was packaged for sale and had a variety of “trademark” stamps on them which included the brand name “Ebola.” Davis remains in the Ocean County Jail and is being held on $300,000 bail.