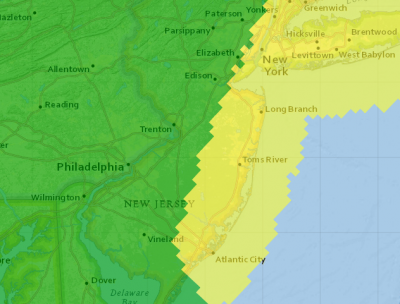 The areas in yellow are at the highest risk for severe thunderstorms Tuesday night and Wednesday morning. (Credit: National Weather Service)

Strong storms, some severe in nature, are possible Tuesday night, with the coastal portion of New Jersey the most likely area to be affected, the National Weather Service’s Mount Holly office said Tuesday morning.

“The primary hazard with any storms will be strong winds,” the office said in a statement.

Showers and thunderstorms are forecast to roll into the area before 1 a.m. Wednesday morning, followed by more showers between 1 a.m. and 4 a.m., and the chance of additional scattered thunderstorms after 4 a.m. The overnight low temperature will be about 60 degrees.


New rainfall amounts will be between a tenth and quarter of an inch, except higher amounts possible in thunderstorms, the forecast said.

Mostly cloudy skies Wednesday morning will ultimately give way to sun with a high of 74, according to the forecast.