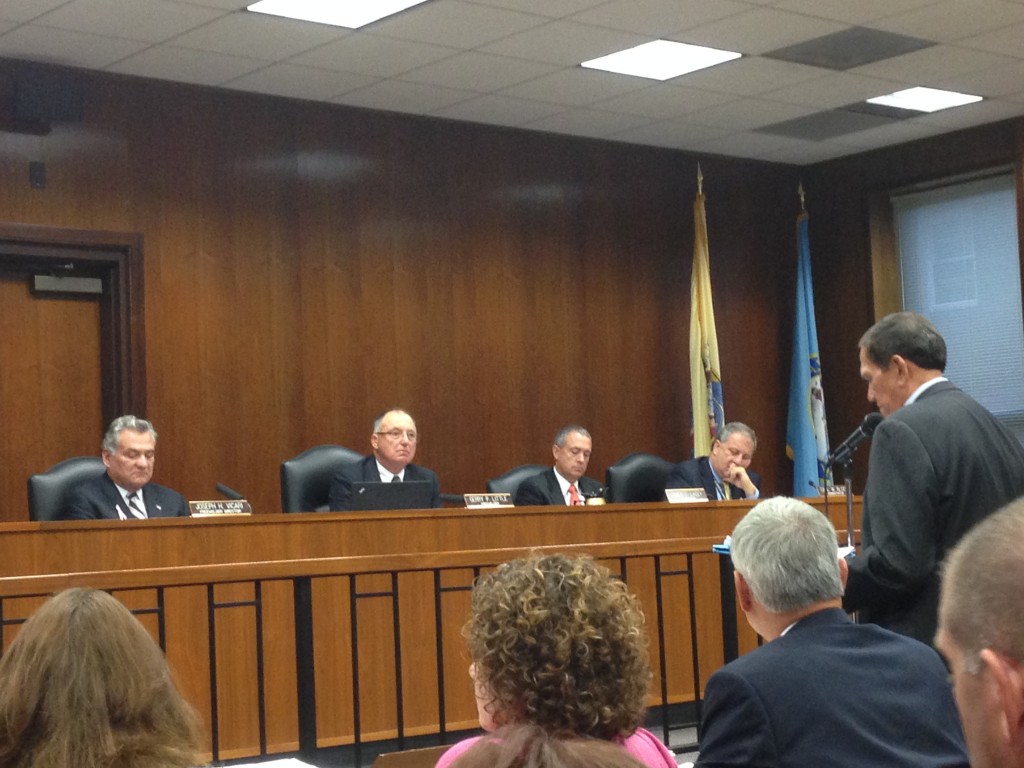 The man who has accused Ocean County Freeholder Director Joseph Vicari with cronyism, harassment and “bullying” county workers faced his nemesis in a tense exchange with the county’s freeholder board on Wednesday, but may have met his match with county officials who poked holes in some of the accusations he has made in the media as Election Day draws closer.

William Santos, a longtime Republican from Jackson and the former building and grounds superintendent for the county, has waged a war against Vicari in the media since the summer. Santos, in newspaper and television interviews, has said FBI agents visited his home two years ago with questions pertaining to an investigation of county government. He has also claimed that he was pressured by Vicari to provide a lucrative engineering consulting contract to Joseph Veni, a former member of the Brick Republican organization who was ousted from county government after lewd e-mails surfaced over the summer following the filing of a lawsuit by a former employee. Santos also claims he was forced out of county government by Vicari, a position that was squarely challenged by county officials, who cited letters from Santos announcing that he was resigning in order to retire and move to Florida.

While Santos’ talk of an FBI investigation have garnered attention in the press, there has been no solid evidence to back up the claim. The FBI does not confirm or deny investigations as a matter of policy, and Wednesday, county attorney Jack Sahradnik said no agents ever contacted the county.


“We have not been contacted by anyone, in any way associated, with the FBI or any other state or federal agency, for any documents,” said Sahradnik.

Sahradnik’s statement on the lack of contact with the FBI followed a tense exchange between Santos and several members of the freeholder board during a public comment portion at the board’s meeting Wednesday.

“I truly believe you feel you are above the law, as did Richard Nixon, and we all know what happened to Richard Nixon, with that same attitude,” Santos told Vicari. “You’re a bully. You tried to bully me. It’s time for a change in Ocean County, and with any luck, that change will happen within a few weeks.”

Freeholder John P. Bartlett honed in on the validity of Santos’ claim about the purported FBI investigation, asking him why he never brought the issue up to the county attorney or administrator, since he was still employed in county government in June 2012, when he said FBI agents came to his door at 6 a.m. asking questions.

Santos replied that the FBI told him to keep the conversation confidential and that they have still not authorized him to speak about the matter.

“So why did you decide three weeks before the election, that this conversation you supposedly had with the FBI, was suddenly no longer important enough to keep confidential?” asked Freeholder Jack Kelly. “Is it because as you stated, you hate Joe Vicari so much that politics are more important than this investigation you speak about?”

“I took it upon myself,” replied Santos.

“I think it’s a political thing,” said Kelly. “i don’t think anybody ever came to your house. I think, if anything, you called the FBI, they came, and they said, ‘there’s no merit here.’”

Bartlett continued to push Santos on his claim that he was forced out of county government, holding in the air copies of e-mails between Santos and Keith J. Goetting, director of employee relations for the county.

“I appreciate your offer, however, under the circumstances and for purpose of retirement, I will be terminating any and all relationships with Ocean County on or before June 30, 2013,” one e-mail said. Others indicated Santos would be considered for another position if he wanted to leave the building and grounds job.

“You told me that you had a job lined up in Florida and you were very anxious to go to it,” said Bartlett. “In no way were you ever let go by the county, or were you forced out.”

As for Veni, county officials said Veni’s bid on the engineering contract was the lowest of all those received, a statement which drew audible ire from Vicari’s Democratic opponent Tim Ryan, who was sitting in the audience at the meeting.

Santos has claimed the bid specifications for the contract Veni eventually received were tailored specifically for him.

In a brief statement, Veni publicly asked Santos to rescind his allegations and “ the lies he told the Asbury Park Press and Walt Kane of News12 about me.”

Veni immediately walked out of the meeting after he addressed the board. He did not return.

Finally, Santos made yet another claim against Vicari, this time accusing him of having received an e-mail in June 2012 about the purchase of “bug detectors, microphone detectors and spy finders,” apparently to be used to seek out recording devices that might be used by law enforcement.

Vicari, referencing a response he gave at an Asbury Park Press editorial board debate with Ryan earlier in the day, brushed off the accusation and said the e-mail Santos found was a SPAM message he received in his account.

“I also got an e-mail from the Prince of Nigeria saying I won a million dollars,” said Vicari.

Members of the public who spoke at the meeting unanimously supported Vicari in the matter.

“I see personal attacks trying to derail what we are doing up here,” said Dan Toth, a former Brick Township council member, saying he was the victim of “personal attacks and vitriol” during an election.

“I was labeled a crook, they even made up that I was a martial arts instructor in Brick Township because I was trying to help that individual build his business,” said Toth, referring to allegations made by former Brick mayor Stephen C. Acropolis after Toth sided with Democrats in a number of votes.

Ryan did not directly address Santos’ allegations against Vicari when he briefly addressed the board. Instead of pressing the issue, he asked for agendas for board meetings to be placed on the county website 48 hours before a meeting and briefly traded barbs with Bartlett about an apparent comment at the Press’ editorial board meeting where he said he would bring business experience to the freeholder board if elected.

Vicari, for his part, brushed off Santos’ claims as “totally untrue, unfounded and unsupported,” saying Santos’ claim that he “hates” Vicari is driving his allegations against the incumbent freeholder as well as his support for Ryan.

“When people walk around for two years and talk about hate, it’s a sad thing,” Vicari told Santos. “You’re possessed by hate, and I’m not going to debate you. I feel sorry for you.”