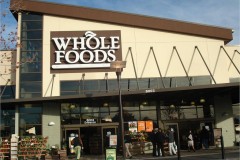 The location of a long-rumored Whole Foods supermarket in Wall Township has been revealed to be a popular gym.

The high-end supermarket chain will take the place of Brielle Sports Club in the Allaire Plaza shopping center, 1933 Route 35. Members of the of the gym were notified over the past week that their memberships would expire Dec. 31 and that Whole Foods would be taking over the lease of the storefront.

Allaire Plaza once housed a Pathmark supermarket which was shuttered in 2009 after A&P purchased Pathmark; an A&P supermarket is located across the street. The Pathmark space was eventually leased to Lowe’s Home Improvement, bringing into question where the rumored Whole Foods store would be located.


Mainardi Management Company, manager of Allaire Plaza, said in a statement that the Whole Foods store would occupy 40,000 square feet of space and had a likely opening date of “late 2015 or early 2016.”

The Wall Township location is one of 21 new leases signed by Whole Foods in recent months. It will be the fifth specialty supermarket to open in Monmouth County and the first in close proximity to Ocean County, where no such supermarkets operate.