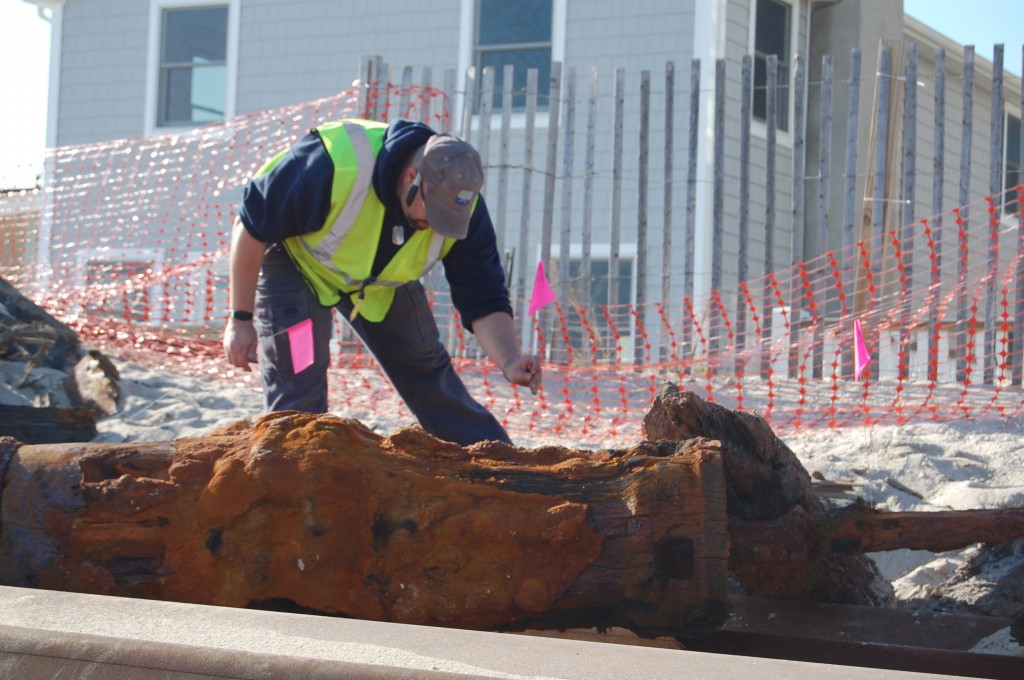 A investigator examines pieces of a shipwreck in Brick, N.J. (Photo: Daniel Nee)

What’s truly lies feet below the beach in Brick?

State officials on Thursday began the process of using high-tech equipment to get a better picture of a potential 1850s shipwreck that was uncovered last month by crews building a steel sea wall revetment along the township’s beachfront.

Thought to be the remains of the long-lost Aysrshire, a Scottish brig that was wrecked onto the beach Jan. 12, 1850 while carrying 201 immigrants from England and Ireland, state historical preservationists and research engineers mapped the site using ground-penetrating radar and metal-detecting devices to get a better idea of how big the ship is, what shape it’s in, and what will eventually become of it.


Alongside the technologically-advanced equipment was another small group of DEP employees who were carefully examining and measuring the pieces of the ship that were unearthed last month by the construction crew.

“They’re taking measurements of the different timbers and making notes of the different kinds of materials,” said Kate Marcopul, a historic preservation specialist with the state Department of Environmental Protection. “They’re going to use that to, hopefully, give themselves information so they can better assess the age during which the vessel was constructed.”

The historical investigators are also looking into the condition of the wreck and how well it has been preserved in order to come up with a plan for permanent preservation as well as to continue the installation of the sea wall, which has been temporarily halted in a 200 foot zone around the site.

The most likely scenario is for the ship to ultimately be preserved in place under the sand, Marcopul explained, an outcome that helps preserve the integrity of the wreck and what it represents historically.

“Preservation in place, from a historic preservation perspective, is always the preferred choice,” she said. “We have reason to believe that the remains of the vessel underground are in a reasonably stable environment, and the minute you would bring any of those timbers to the surface and expose them to the air, they would begin to decay.”

The ground-penetrating radar rounds out the project by giving officials an idea of the size and shape of the wreck. The data from the device, which is pushed through the sand on a mobile cart, produces data an on LCD screen similar to those found on marine fishfinders. A picture is then virtually painted of underground disturbances that can give investigators a glimpse into what they’re dealing with and if items from the wreck extend out past the spot where it was initially discovered just south of 8th Avenue.

Another machine sends pulses of electromagnetic energy into the sand in order to read what materials the ship might be made out of.

“We’re looking for subtle changes, anything out of the ordinary” said Phil Durand of Electrophysics, a company hired by the state to help investigate the site. “The radar works pretty well in sand until you get to water, which basically absorbs all the energy. From the radar data, I can tell it’s dry at least down 10 to 12 feet, so we’re able to get some good data pretty far down.” 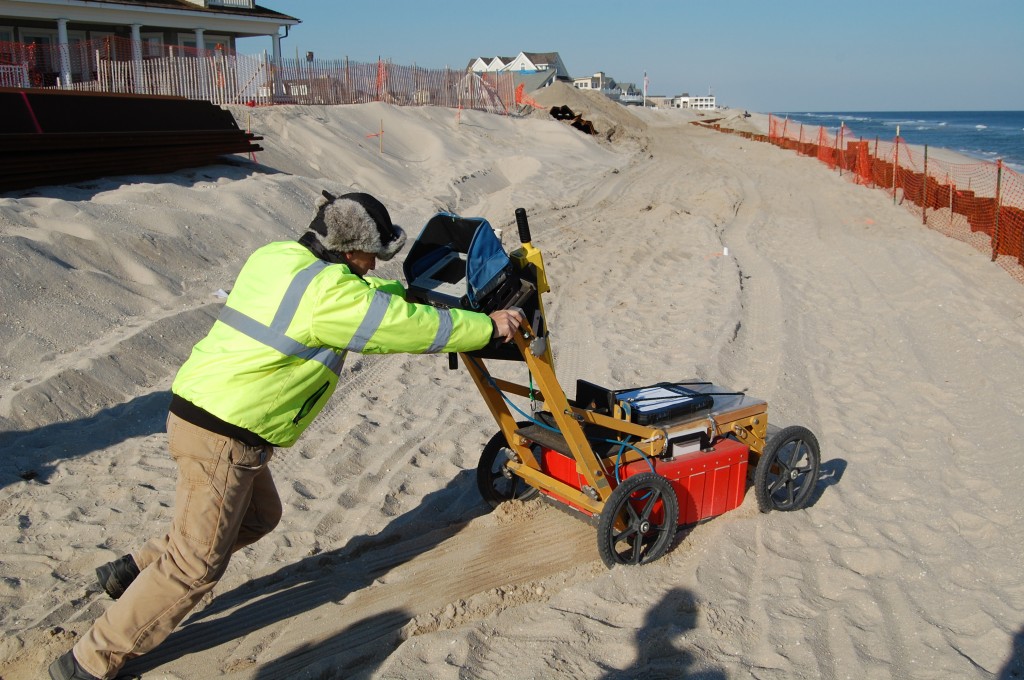 Ground-penetrating radar is used at the site of a shipwreck found in Brick, N.J. (Photo: Daniel Nee)

Altogether, an area about 340 feet long was studied, with markers placed in the ground where items of interest may have been detected.

The DEP and its contractors will work together to produce a report on the wreck which should be available in a few weeks – about two weeks after the all of the investigatory work is completed. Depending on the initial data derived from Thursday’s survey, crews could return next week with a geoprobe – a vibratory drill that can take core samples from beneath the surface – to finish the job. 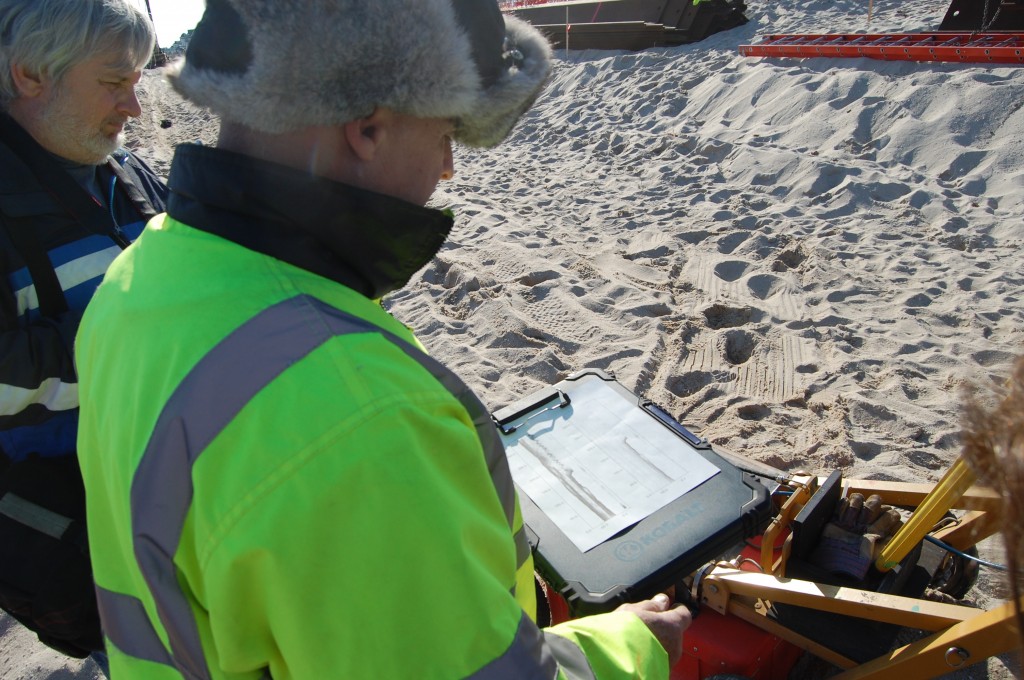 Ground-penetrating radar is used at the site of a shipwreck found in Brick, N.J. (Photo: Daniel Nee)

As for the revetment project, state officials are waiting to see what the final report on the wreck looks like, but in the mean time are considering their options, which could involve substituting a rock wall for the steel in the 200 foot-long area.

“Stone would give you a similar level of protection,” said Erik Doyle, a DEP engineer. “It’s still up in the air, seeing if we can get around this thing. If we can work around it, that would be the ideal situation.”