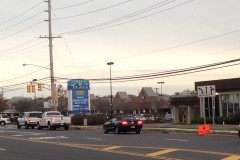 Businesses in Brick Township would be required to obtain a mercantile license under an ordinance up for a vote Tuesday night by the township council.

The ordinance would require any person or company “engaging in, conducting or operating” a business within Brick Township to pay $25 annually for the license, the application for which would include the name and owner of the business, the present address and phone number of the business owner, a cell phone number of an in-state representative who could be called in case of an emergency, and information on any alarm system at the business and contact information for the alarm company.

The mercantile license ordinance was introduced last month, with Council President Susan Lydecker explaining at the time that the measure was prompted by a number of instances where police or township officials could not find contact information for businesses in emergencies.


“We had a few incidents in our township where there were problems around businesses or something happened inside a business and we were not able to get in touch with anyone after hours,” said Lydecker, calling the ordinance a “valuable tool in protecting our community and our businesses.”

No township officials commented at the ordinance’s introduction as to how the $25 figure was decided upon for the fee, or how the revenue generated from the licenses would be spent. A separate measure up for a vote on Tuesday night is a resolution suspending the $25 fee for those businesses that apply before Jan. 31, 2015.

Enforcement of the license would rest with the code enforcement office and police department. The ordinance carries penalties for those businesses that do not comply – a $500 fine could be levied for failure to comply with any portion of the ordinance. Further, the township could act to revoke a business’s license for lying on the application form or conducting business “in an unlawful manner.”