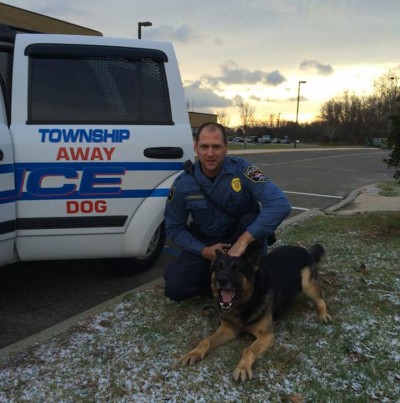 Brick Police K9 Max had an out-of-town assignment Thursday morning: ensuring New Egypt High School in the western portion of the county was free of drugs.

Max, and Ptl. Keith Prendeville, his handler, were among five police K9s that are participating in a county-wide effort to deter students from bringing illicit drugs into the school environment.

The dogs are trained to sniff out drugs in lockers and other areas of schools. According to the Ocean County Prosecutor’s Office, all of the county’s high schools are participating in the program as part of a larger effort to combat the county’s heroin crisis. In addition to the K9 enforcement, high schools county-wide, including both of Brick’s, are participating in a program where a QR code sticker is placed in each locker that leads students to an anonymous hotline where drug activity can be reported to the correct authorities.

“If there is any threat that the individual’s identity would be compromised, the investigation would not move forward,” Della Fave said.

The programs are funded through the seizure of money from drug dealers.