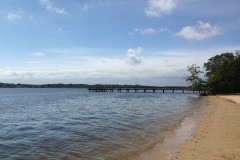 Brick police officers are being credited with saving the life of a woman who attempted to commit suicide Monday by drowning herself in the Metedeconk River at Windward Beach.

Brick Police Ptl. James Albanese was told by a witness that a woman had entered the water at the beach near the T-dock at about 9:40 a.m. in an attempt to end her life, Sgt. Henry Drew said.

Albanese rushed to the area, located the woman and went into the water himself in order to rescue her. He was ultimately able to bring her to shore, Drew said, although she was unconscious at the time. By that time, Sgt. John Talty and Ptl. Harrison Theibault arrived on scene and assisted with lifesaving efforts.

The victim’s name is being withheld for privacy purposes.