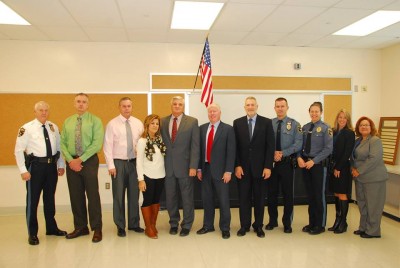 Brick Township’s police department and school district ushered in a new, student-led program into the schools this week that is aimed at helping combating substance abuse.

Called “Lead and Seed,” the program is led by students in Brick’s two middle schools who will advocate, promote and participate in various activities designed to combat the misuse of opioids and prescription medications.

The students will “lead” their peers and “seed” the message to their schools communities, organizers say.


The students are being joined by school staff and community volunteers in implementing the program. All involved were lauded by officials this week.

“The goal is to save young people from a life of addiction and crime,” said Police Chief Nils R. Bergquist. “Their efforts will undoubtedly save lives.”

The Lead and Seed program is designed to reinforce, and take the message of the department’s D.A.R.E. program to another level, placing special importance on keeping the conversation started in the lower grades alive in order to help reduce the misuse of prescription medications, which experts say is often a gateway to the abuse of heroin and other drugs.

Both of the departments DARE officers will participate in the Lead and Seed program, police said.

The student leaders of the program have already participated in an intensive training program to allow them to craft a message to their classmates and spread the word about the dangers of substance abuse, according to Sgt. Henry Drew. The two training sessions provided the students with “tool kits,” which consist of action plans to bring into their school community.

“Peer pressure doesn’t always have to encourage negative behaviors,” said Mayor John Ducey, who was on hand for the introduction of the program this week. “This program utilizes peers to pressure and educate their friends and classmates to make positive life decisions and avoid the damage caused by substance abuse.”

The school district and police department has partnered with the Barnabas Health Institute for Prevention’s DART Coalition to bring the program to Brick.