The school district will bump a kindergarten teacher to a supervisor position to help assist staff in meeting new mandates for standardized testing and other initiatives, and the superintendent would like to see more supervisors added.

The $103,875 salary for an elementary math and language supervisor, on this week’s Brick school board meeting, was not without contention, as board member Susan Suter questioned the need for the position, and the short time spent recruiting for it, she said.

District Academic Officer Lorraine Morgan said due to the “extraordinary intense mandates” new to the district such as new standardized tests such as PARCC, district assessment and curriculum mapping, the supervisor is needed.


“There are layers and layers of processing that needs to be done. In order to insure that we adhere to all these mandates with integrity and fidelity, we need to have an individual, and elementary individual to assist with this,” Dr. Morgan said.

Suter said she had only recently learned about the position, and questioned the “rush” to fill it. She inquired with Superintendent Walter Uszenski about how many candidates applied for and were considered for the job, which she said was a very brief period. Uszenski said he did not know how many candidates applied or were vetted before he came to make his recommendation.

“First of all I don’t see the applications for these people on there,” Suter said, criticizing the process. “Why is this such a rush? In my curriculum committee we were just told about this on Monday the 8th.”

Suter asked why the position was needed now, to begin in January instead of at the start of a new school year for example.

“I haven’t heard one complaint, everything is aligned to the standards, teachers are happy, everything is going great, and all of a sudden, we need another supervisor? I don’t understand why,” said Suter, in a lengthy discussion with the superintendent that was at times contentious. “Why wouldn’t they come to the committee to ask for this?”

Uszenski said central administration positions wouldn’t manifest in committee but would instead originate from his office and then be discussed in board subcommittees, in this case Human Resources. “They come if the superintendent requests them to be there,” he said. “I have been asking since I’ve come here for additional supervisors in all areas.”

The superintendent said that Brick should align itself with similarly-sized districts’ structure of having supervisors both in the elementary and secondary schools.

The superintendent added that the county school board applauded his budgetary request for the additional supervisor, “because it is something that is direly needed. Just like we need teachers, we need supervisors …We need to get supervisors in there that can work with the mandates and work with the curriculum and work with central administration.”

Suter said what she really didn’t understand was the timeline. “We heard about this December 8, the posting went up, and a week later, we have a candidate. I just feel that this is rushed in. Why can’t we wait until we have the full board?” she said, referring to the beginning of a new school board term in Janaury, instead of the final meeting of the year.

Suter also asked why the position was a priority over other the need for new high school textbooks or a much-needed parking lot. Uszenski said that new textbooks are coming after the best books can be found, as he’d like to spend the time to make sure the new texts align with new PARCC/Common Core curriculum mandates.

“I’m not going to waste taxpayer’s money,” he said, adding that there was $300,000 pledged toward new textbooks, and that they would be coming. “Most textbook manufacturers will sell you that they are aligned to Common Core, but they are not.”

The bottom line, said the superintendent, is the position will relate to student achievement, and moving forward with student achievement is the most important thing. “The board has been gracious and helped administration to give us what we need to move forward,” he said.

Suter continued that the process was rushed, and that there were many qualified internal candidates. “I think this is unacceptable.”

The board ultimately passed the personnel change, transferring Emma Havens Young school kindergarten teacher Daniel Layton from a teacher to the elementary math and language supervisor position. Suter voted against the measure, as did board members Frank Pannucci, Jr.

Layton will begin serving in the role in January. The personnel move was approved by the board for January through June, prorating the salary. Layton, a kindergarten teacher and Emma Young school, is in his 8th year as a full day kindergarten teacher, according to his teacher page on the Brick school’s site. He has bachelor’s degrees in political science and communication from Monmouth University, along with graduate degrees in elementary education and educational leadership. 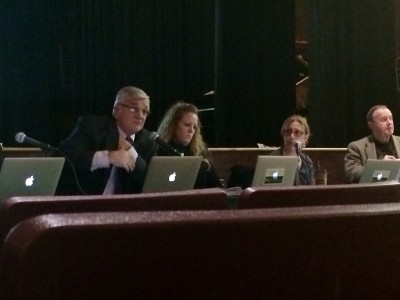