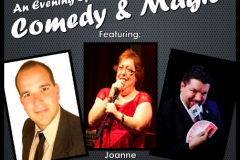 A flyer for the event.

A comedy and magic show will support American Legion Post 129 in Toms River.

The show will include a buffet dinner and cash bar for $25 per person, and will feature comedians Patrick Bean and Joanne Syrigonakis, as well George Gee, a local performer who combined comedy, magic and side show into one act.

Patrick Bean is a comedian and actor who has performed up and down the east coast. His unique sense of humor has entertained audiences in comedy clubs and colleges for years. Patrick is a Comedy Quarry All-Star and a regular of the Stage 4 Comedy shows in Montclair, NJ. In addition to stand-up comedy, he is a founding member of the Second Place Champions improvisational comedy troupe.

Raised in the bowels of New Jersey, Joanne Syrigonakis has learned to make lemonade out of lemons. The daughter of a Greek immigrant, she knows what it is like to work hard for the American dream. For 9 years, she has been perfecting her comedy to reflect her sarcastic views of life as we know it. You will find yourself identifying the craziness of your world and family in the heart of her material. Sit back and enjoy with a glass of Ouzo.

George Gee is an award-winning performer who combines his skills in magic, comedy, and side-show in an amazing hard to forget show. George has been performing for over 20 years and has been seen in 9 countries, 21 states and for 54 military units around the world. His performance will have you laughing and amazed at the same time. Get ready for a night of entertainment that you will love.