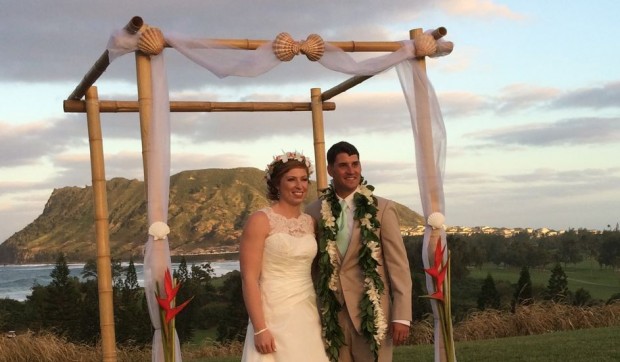 One of the U.S. Army captains whose wedding had to be suddenly moved off a golf course in Hawaii over the weekend is a Brick native – and he received a call from President Barack Obama apologizing for the debacle.

Edward Mellue Jr., a 2003 graduate of Brick Memorial High School, was set to marry fellow U.S. Army Capt. Natalie Heimelon Sunday at the Kaneohe Klipper Golf Course at Marine Corps Base Hawaii. The only problem: the commander-in-chief had a golf game scheduled at the same time.

The couple were forced to make a last-minute move to the base commanding officer’s lawn, which offers a panoramic view of the course. The move prompted jabs from Obama’s political opponents, but the President – who hadn’t been told about the wedding in advance – made up for the incident by personally calling the couple and offering an apology.


“Listen, congratulations on your wedding. I feel terrible, nobody told us,” Obama told the couple via speakerphone. “If they had just mentioned that they were going to have a wedding on the 16th hole, we would have skipped the 16th hole.”

Obama then asked the couple how long they had been dating and asked about their honeymoon plans.

“The only question is, where do you honeymoon when you live in Hawaii?” he asked.

They replied that they hadn’t selected a spot, and that the mix-up with the location was a “blessing in disguise” since the view at the second location was probably better than the initial spot.

Mellue grew up in the township’s Herbertsville section, friends told Brick Shorebeat. He attended the United States Military Academy in West Point, N.Y. and played soccer there for the Army Black Knights. Mustangs soccer fans might remember Mellue serving as team captain for three seasons and being named a two-time Ocean County Player of the Year.

Ironically, according to his biography on the Black Knights website, Mellue also lettered in golf while at Memorial.