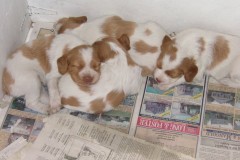 Legislation aimed at protecting pet owners and reducing the number of pets from so-called “puppy mills” being sold in New Jersey has passed muster with the state legislature and is on its way to the desk of Gov. Chris Christie.

The legislation, sponsored by state Sen. James Holzapfel and Assembly members David Wolfe and Gregory McGuckin (all R-Ocean), would require pet stores to display additional information about each dog and cat for sale, including the name and address of the breeder.

“By requiring a pet store to disclose the history at the point of sale, we can give consumers the opportunity to research the breeder and make an informed decision on where to make their purchase,” said Holzapfel, a former Ocean County Prosecutor who said the legislation was years in the making.


The bill was inspired, at least in part, by the case of Puppies Galore, a Brick Township pet store that was shut down by health authorities and, ultimately, township officials, after 39 sick dogs were removed from the store, some dehydrated and malnourished. The store was owned by Maria De Santis and Nathan “Nat” Sladkin, who were ultimately charged with 42 counts of animal cruelty. The pair eventually reached a plea bargain with prosecutors, agreeing to pay fines, restitution and a lifetime ban from selling pets in New Jersey. It was speculated that the dogs at the store had originated from puppy mills.

“Puppy and kitten mills are anonymously breeding and selling unhealthy pets to customers without providing information regarding the medial history of the animal,” said Wolfe. “It can be devastating for a pet owner to watch their new dog or cat struggle with an illness in the early stages of its life.”

The Pet Protection Act requires all information regarding a pet to be posted on the cage or enclosure a sign that includes the age, name of breeder and their contact information as well as the breeder’s USDA license number.  In addition, consumers would be able to access the USDA inspection reports for all breeders, with the law imposing a $500 penalty for failure to comply with the requirements.

“Pet owners deserve to know all of the background information about its breeder, quality of life before the sale and all medical history involving the pet before purchasing,” said McGuckin.  “With this legislation we will help put the bad breeders out of business and ensure that fewer families do not suffer from the financial burdens an unhealthy pet will place upon its owner.”

The bill requires the signature of Gov. Chris Christie to be enacted into law.