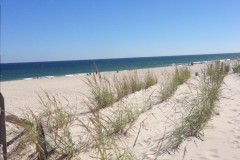 Jenkinson’s, the private company that owns the bulk of Point Pleasant Beach’s beachfront, has filed a federal lawsuit against New Jersey over the state’s intention to build a protective dune in the town.

The Star-Ledger reported the lawsuit Friday, with the legal action focusing on whether the state, U.S. Army Corps of Engineers and the borough of Point Pleasant Beach have the authority to condemn small slivers of oceanfront land needed to bulk up dunes as part of the project.

“The suit is intended to obtain a determination by the court concerning the limits of what the Army Corps requires for its projects,” John Buonocore Jr., the attorney representing Jenkinson’s, told the newspaper.


Jenkinson’s has, thus far, refused to voluntarily sign an easement allowing the project move forward, a significant impediment to the project since the company owns a large portion of the entire borough’s oceanfront.

While the lawsuit was filed over property rights, a concern for the company is, no doubt, whether a protective dune will restrict the view of the Atlantic Ocean from the company’s popular, privately-owned boardwalk.

In October, officials with the state Department of Environmental Protection told Shorebeat that ocean views from the boardwalk could be restricted.

In both Point Pleasant Beach and Seaside Heights – where there are boardwalks – engineering officials said the planned dunes will be about 18 feet above sea level, so depending on the grade of the beach in a certain area, a view of the ocean may eventually be something of the past for those walking the boards.

“The project was designed to provide a level of protection independent of the view of the boardwalk,” Bill Dixon, acting manager of the DEP’s Bureau of Coastal Engineering, said at the time.

In Brick, where there is no boardwalk, about 40 oceanfront easements are being prepared to be condemned through a former eminent domain process.