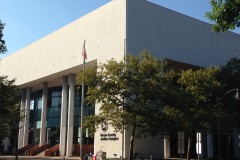 Ocean County officials have named Sandra Mueller, a Stafford Township resident, as the new warden of the Ocean County Jail.

Mueller will replace longtime warden Theodore Hutler, of Lacey Township, who is retiring after serving in the position since 1985 and working for the county since 1978.

“Sandra has been an outstanding employee of Ocean County for more than three decades,” said Freeholder John P. Kelly, Director of Law and Public Safety. “I am 100 percent confident in her abilities to lead this department.”


Mueller was appointed at a meeting of the Ocean County Freeholders this week.

Mueller, the first female to hold the position of warden in Ocean County, started her career with the county as a penal counselor in 1983. Working her way through the ranks, which included four promotions recommended by the current warden, Mueller has worked as the department’s Chief of Administrative Services since 1999, serving as second in command in the administration, management and operations of the Ocean County Department of Corrections.

She also helped oversee the 140,000 square foot expansion of the jail, which was completed in 2011, officials said.

“The jail design incorporated operation concepts to increase security and operational efficiency,” Kelly said. “It was important that the expansion be designed right because it serves as a focal point for public safety here in Ocean County. Sandra directly assisted the warden in the protection, custody and discipline of inmates and the safety of the facility.”

Mueller holds a Masters in Administrative Sciences from Fairleigh Dickinson University, a Bachelor of Arts Degree in Psychology from Richard Stockton College, and is a certified public manager and certified jail manager.

“I look forward to working closely with the board and to serving the citizens of Ocean County in this capacity,” Mueller said at the meeting.