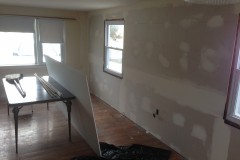 The interior of a home damaged by Superstorm Sandy. (Photo: Daniel Nee)

A group of Ocean County lawmakers have introduced two resolutions in both houses of the state legislature, calling on the federal government to investigate whether engineering reports and flood insurance claims were revised or manipulated in the wake of Superstorm Sandy, leaving the homeowner accountable for damages that should have been covered.

“Homeowners are being taken advantage of by flood insurance companies and we need the Federal government to step in and examine these fraudulent claims,” state Sen. James Holzapfel (R-Ocean) said in a statement. “The residents in our district suffered some of the worst damage from this storm and are still recovering. It is repugnant to think that insurance companies would take advantage of those most in need.”

A federal investigation is required, Holzapfel said, because companies that processed claims for the national flood insurance program are not solely based in New Jersey.


The first resolution introduced by Holzapfel in the Senate, and Assemblymen David Wolfe and Greg McGuckin (both R-Ocean) in that body, urges congress to conduct an immediate investigation and hearing to determine the extent to which insurance companies provide flood insurance policies that used revised engineering reports to deny legitimate Superstorm Sandy claims. The second resolution urges the United States Department of Justice to investigate the handling practices of insurance companies to determine if engineering reports or other investigatory activities were manipulated to fraudulently deny coverage to storm victims.

The recent court case in New York, and similar reports in New Jersey, have revealed “in great detail,” the group said, allegations that insurance companies handling hundreds of Superstorm Sandy flood insurance claims committed practices including secretly rewriting engineering reports to change the reports’ conclusions to avoid covering the loss, leaving insured homeowners to be responsible for the damage out of pocket.

“We saw in the New York case that insurance companies involved in Superstorm Sandy flood insurance claims, in potentially hundreds of cases, were secretly rewriting engineering reports to change the results to avoid covering the loss,” said Wolfe. “This is completely unacceptable and insurance companies need to be held accountable.”