‘The Interview’ Isn’t Showing in Brick, But One Monmouth Theater Has It 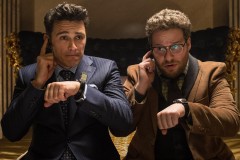 Looking to cap off your Christmas by seeing the now-infamous movie “The Interview?”

You won’t be able to see it in Brick – or anywhere in Ocean County, for that matter. In fact, only seven theaters in the entire state of New Jersey will be screening the movie, which garnered international infamy after it may have prompted a cyber attack on Sony Studios by groups linked to the North Korean government. In the film, actor Seth Rogen portrays a journalist tasked with carrying out a plot to assassinate North Korean dictator Kim Jong Un during a television interview.

After threats of violence to moviegoers following the hack, Sony canceled the film’s release, but reversed course this week. The threats have since been linked to North Korea. About 300 theaters across the country will show The Interview, a far cry from the 2,000 theaters initially expected to show it.


For Shore residents who want to see The Interview, there’s essentially one option: CineGrand Middlebrook Cinemas 10 on Route 35 in Ocean Township, Monmouth County. The movie will be shown at 5:10 p.m., 7:45 p.m. and 10:20 p.m. Christmas night. A full schedule of times resumes Friday. The theater is located at the Middlebrook Shopping Plaza, 1502 New Jersey 35, Ocean Township, NJ 07712.

The six other theaters in New Jersey showing The Interview are: