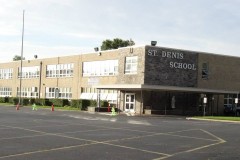 Media reports and sources close to two local Catholic schools have confirmed that St. Denis School in Manasquan and Holy Family School in Lakewood will each close after the current school year.

Neither of the schools are in Brick, though both draw students from the township. At one time, four busloads of Brick students were brought to St. Denis School every day. According to an article in Wednesday’s Asbury Park Press, St. Denis’ enrollment peaked at 392 in the 1970s but had fallen to 107 this school year.

Holy Family had 150 students this year, the same report said.


Officials at the two schools are working with others in the area to arrange for students to transfer. St. Denis, specifically, is working with St. Dominic School in Brick and St. Catharine School in Spring Lake to place their Ocean and Monmouth county students, respectively, the report said.

Tuition is $4,300 for Catholic families at Holy Family School and $5,200 for non-Catholic families. At St. Denis, tuition is $4,990. Officials from both schools said cost was a major factor in declining enrollment. Families who send their children to Catholic schools must pay the tuition on top of New Jersey highest-in-the-nation property tax burden, which averages just under $8,000 per year.