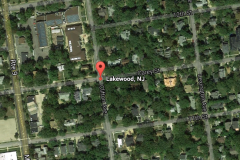 A Lakewood man is facing motor vehicle charges after he struck a 9-year-old boy Tuesday.

The incident occurred at Clifton Avenue and Carey Street in Lakewood at about 5:18 p.m., said Al Della Fave, spokesman for the Ocean County Prosecutor’s Office. Shortly after the boy was hit, Hatzolah EMS transported the unconscious child to Jersey Shore University Medical Center where he was treated for various injuries including head injuries.

A preliminary investigation conducted by the Lakewood Police Department and the Ocean County Prosecutors Office showed that a school bus was turning from Carey Street southbound onto Clifton Avenue, when it stopped with its warning stop lights activated as students disembarked.  As the boy left the bus and began to cross the street, he was struck by a 2004 Nissan Sentra traveling northbound on Clifton Ave and dragged through the intersection approximately 80 feet, Della Fave said.


The driver of the Nissan Sentra is identified as Michael Adler, 26. He was charged with reckless driving and failure to stop for a school bus.  Adler consented to a blood draw which was conducted at Monmouth Medical Center, Southern Campus, formerly known as Kimball Medical Center, Della Fave said.  The investigation is continuing.