Hope Fades For Sound Wall Off Parkway in Brick in 2015 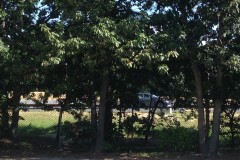 Residents of Brick Township’s Evergreen Woods development have been pleading with state authorities for more than a year to have a sound barrier wall built between the Garden State Parkway and their condominium complex just west of the highway’s now-expanded southbound lanes.

The residents come diligently to every council meeting, make the trek northward to Turnpike Authority meetings and make media appearances whenever they are invited to do so. They complain of unbearable noise levels since thousands of trees were taken down to expand the highway’s shoulders and have used electronic equipment to record noise level readings of up to 75 decibels.

But their cries about the noise have fallen on deaf ears with the state agency and 2015 looks to be starting with another setback in their quest.

Ducey met with new state transportation commissioner Jamie Fox and dedicated much of the meeting to the concerns of the Evergreen Woods residents. Fox, who also serves on the Turnpike Authority – the agency that controls the Parkway – “wouldn’t budge” on the issue.

Evergreen Woods residents say the state is legally obligated to place a sound barrier at the edge of their development, but are trying to avoid doing so in order to save money and prevent a precedent from being set that would require them to place sound barriers in other locations similar to Brick.

The latest indications from Fox that a sound barrier is not favored for the area is the latest in a line of setbacks the residents have had to deal with. When the township promised they would use a state grant to replace thousands of trees lost during construction, the state stymied their efforts to do so, saying state money could not be used to plant trees on privately owned property. The town asked for an exception, but the state attorney general’s office sent a letter reaffirming the original decision.

“It seems like money flows to those who have influence at the expense of the citizens,” said John Sluka, one of the development’s most vocal residents, expressing frustration over millions of dollars in state contracts going toward the road with nothing going toward the people the construction affects.

As 2015 begins, the residents are back where they started: plenty of noise and no way to shield it.

“I was hoping with the new commissioner there that he’d have an open ear to it,” said Ducey. “I figured we’d approach him, but he is opposed to them as well.”