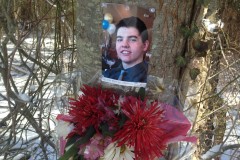 A memorial to Francis Duddy at the scene of a fatal car accident in Feb. 2014. (File Photo)

The 19-year-old driver of a vehicle who was drunk when he crashed into a wooded area at the end of a Toms River cul-de-sac, killing his friend who was a passenger, has been sentenced to 42 months in state prison.

Connor P. Hanifin, 19, of Toms River, was sentenced Friday by Superior Court Judge Wendel E. Daniels. In October, Hanifin pleaded guilty to charges of vehicular homicide and driving while intoxicated. Hanifin will be required to serve 85 percent of the sentence before being eligible for parole.

The accident occurred Feb. 8, 2014 and resulted in the death of Francis Duddy, also 19, the son of Donovan Catholic High School football coach Dan Duddy. Francis Duddy was pronounced dead at the scene; Hanifin was airlifted to Jersey Shore University Medical Center, Neptune, after being extricated from the vehicle by emergency workers.


Authorities say Hanifin was driving his Honda Civic at a high rate of speed when he approached the intersection of Vaughn Avenue, where he lost control of the vehicle on the curve prior to hitting the stand of trees at the cul-de-sac at the end of Yellowbank. The accident left the vehicle pinned vertically against several trees, with the front resting on the ground and the trunk pointing towards the sky, said Al Della Fave, spokesman for the prosecutor’s office.

During the investigation at the scene, Toms River police officers observed alcoholic beverage containers in the vehicle, police said at the time. A blood sample obtained from Hanifin was taken to an independent laboratory to determine whether he had any substances in his system at the time of the collision; the results of that testing revealed that he had a blood alcohol content that exceeded the legal limit.