6 Mile Backup on Parkway South Near Brick Due to Weather 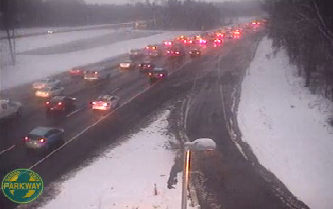 The New Jersey Turnpike Authority is reporting a six mile-long delay from the area south of exit 98 on the Garden State Parkway to the area of exit 89 in Lakewood.

There are “delays and pockets of volume” in the entire area between exits 98 and 89 on Parkway south, the authority said. There are also scattered, though unconfirmed, reports of minor accidents and spin-outs due to rapid icing of the roadway.

Within Brick, most local streets are snow-covered with a layer of ice underneath, contributing to treacherous driving conditions. Main roads in Brick are a mix of icy spots, clear spots and snow-covered spots depending on the traffic volume.


Parkway North is moving along smoothly, data from the Turnpike Authority showed. Delays begin north of exit 98 in Monmouth County. Below Brick, Parkway South and Parkway North are both moving smoothly. A speed restriction is currently in effect on the Parkway, imposing a 35 m.p.h. speed limit due to the snow and icy conditions.

“Temperatures are now crashing across region and will quickly fall below freezing,” said Gary Szatkowski, a meteorologist at the National Weather Service office in Mount Holly.

The temperature in Brick at 5 p.m. Monday was 30 degrees.