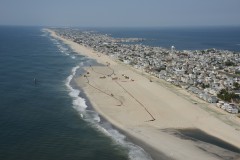 A multi-million dollar project to replenish beaches and build a protective dune along Ocean County’s northern barrier island is on hold as legal disputes involving oceanfront property owners play out.

Steve Rochette, spokesman for the U.S. Army Corps of Engineers Philadelphia district, confirmed to Shorebeat that the project has not been advertised for bidding and no contracts have been awarded for replenishment work.

“We don’t have a precise timeline as to when construction may start because it is contingent on real estate issues and ongoing legal proceedings,” Rochette said.


State officials said in the fall that bids were due to be advertised before the end of 2014 and a contract would be awarded in early 2015, with work beginning in March or April. The $86 million project includes the replenishment of sand on beaches battered by Superstorm Sandy and the construction of engineered, vegetated dunes from Manasquan Inlet in Point Pleasant Beach to the South Seaside Park section of Berkeley Township.

Since the estimates on the project’s timing were made at a news conference in Brick in October, Jenkinson’s, the owner of much of Point Pleasant Beach’s beachfront, filed a lawsuit against the federal and state governments, challenging whether the government agencies have the authority to condemn slivers of land on which the dunes would be built.

“The suit is intended to obtain a determination by the court concerning the limits of what the Army Corps requires for its projects,” John Buonocore Jr., the attorney representing Jenkinson’s, was quoted as saying.

Jenkinson’s has refused to voluntarily sign an easement allowing the project move forward, a significant impediment to the project since the company owns a large portion of Point Pleasant Beach’s oceanfront. Additionally, nearly all of the oceanfront homeowners in Bay Head are refusing to sign easements allowing the dunes to be constructed, as well as about 40 homeowners in Brick and a small number in Toms River.

Some homeowners have public stated they are against the prospect of the government having a right to use their property for a dune out of fear that beaches may become more open to the public by way of restrooms and other facilities. Others have said their property values may be diminished since their homes’ view of the ocean may be restricted by the dune. In the case of Jenkinson’s, the view of the ocean from the boardwalk could potentially be restricted in some areas since the dune would be built in between the boardwalk and beach area.

Municipalities have been working to condemn the would-be easements in the absence of residents’ signatures. Since the state Supreme Court in 2013 threw out a $375,000 judgment given to a Harvey Cedars couple whose easement was condemned in order to accommodate a beach replenishment project, several condemnation cases have resulted in awards of a few hundred dollars or less for homeowners, since the value of the protective dune is weighed against any potential loss of view.