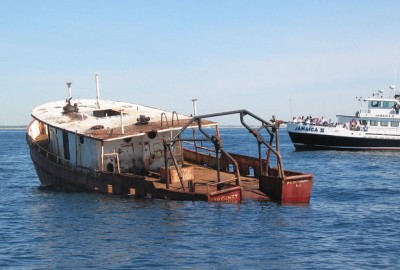 The deployment of a barge to make up an artificial reef off Manasquan Inlet. (Photo: NJDEP)

New Jersey officials have formally proposed rules that would dictate who can use artificial reefs in the ocean for fishing purposes.

For years, the “pots off the reefs” movement simmered in New Jersey, one of the few states where commercial fishing interests were allowed to place gear at man-made, underwater reef sites that were often reserved for recreational anglers who fish the habitat the reefs provide. Commercial fishermen argued that they supported the reef system’s construction off New Jersey, while recreational anglers pointed to a tax on recreational fishing equipment and marine fuel that funded most of the reef system’s construction. The issue was further complicated when the federal government began withholding $250,000 in annual funding from New Jersey due to the concerns that recreational anglers were being denied reef access.


The compromise, reached in 2013 with commercial and recreational fishing groups, allows commercial and recreational fishermen utilizing lobster, fish and conch pots to continue using portions of two existing reefs – the Sandy Hook and Axel Carlson reef – in reserved “full access zones.” Recreational hook-and-line fishermen will continue to have access to all portions of the reefs, including the “full access” areas.

The state Department of Environmental Protection said Tuesday that it will also work with the federal Mid-Atlantic Fishery Management Council to enact a Special Management Zone designation which will allow the DEP to prohibit commercial gear on all 13 existing artificial reefs in federal waters.

The Sandy Hook and Axel Carlson reefs are the only two reefs off the New Jersey coast that are located in state waters, defined as the area from the beach to three miles offshore. The state’s other 13 reefs are located in federal waters. The Sandy Hook reef is located off of the peninsula of the same name. The Axel Carlson reef is located southeast of Manasquan Inlet, off Bay Head and Mantoloking.

In addition to the access restrictions on the state reefs, commercial and recreational lobster potters setting and tending gear within the full access zones must do so only between the hours of sunrise and sunset, and they must call the Marine Law Enforcement Headquarters two hours prior to doing so. Individual pots set in the zones must be marked with a buoy and a string of pots must have a buoy attached to both ends.

As part of the compromise plan, a new reef, encompassing about a square mile of ocean floor, will be constructed in state waters in an area north of Barnegat Inlet to be used for recreational fishing. The Division of Fish and Wildlife is working with the DEP Division of Land Use Regulation and U.S. Army Corps of Engineers in securing the permit for this project, officials said Tuesday.

New Jersey is known for having one of the nation’s best artificial reef systems, which are made up of a host of materials including rocks, concrete and steel, old ships and barges. Other materials have consisted of “reef balls” made by prisoners and even surplus U.S. Army tanks. The materials create a habitat for fish in areas where the ocean bottom is otherwise devoid of structure and, thus, home to relatively few fish.