Two Years To Go For Interchange 91 Construction in Brick 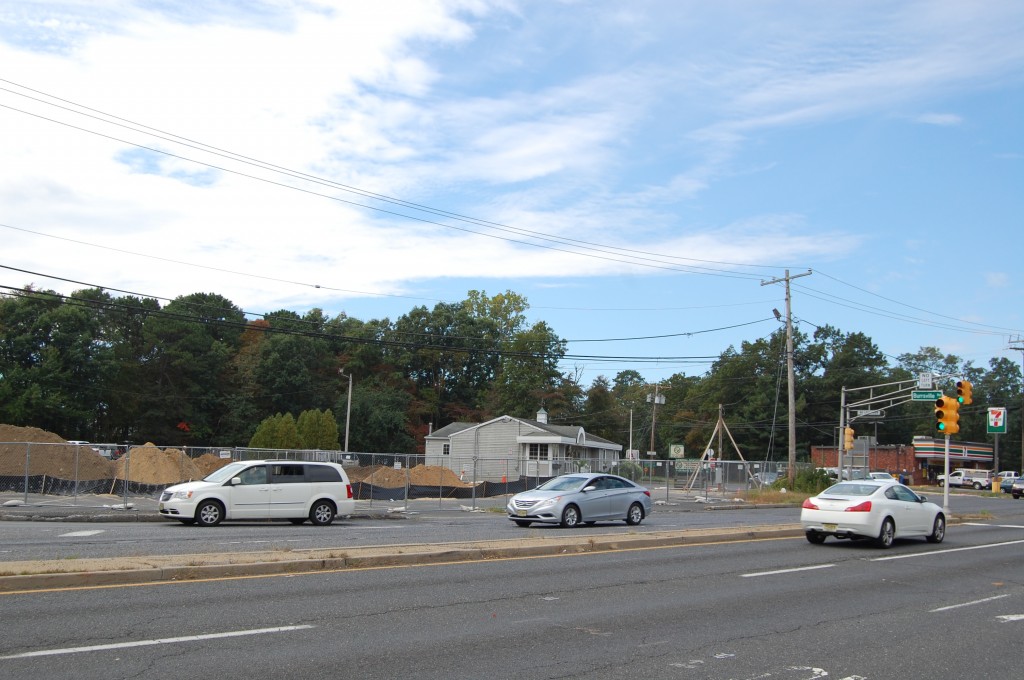 The corner of Burrsville and Burnt Tavern roads in Brick, with a new Santander bank branch under construction. (Photo: Daniel Nee)

The latest estimates from Ocean County officials have the Garden State Parkway interchange 91 realignment project in Brick being completed in Feb. 2017.

County engineering officials were on hand at a township council meeting Tuesday night to brief the governing body on the project’s progress since it began in October. The project will last a total of 850 days, said John Ernst, engineering director for the county. The first step in the project – clearing wooded areas where new Parkway exit and entrance ramps will be constructed – is about done.

“All of the clearings for this project are finished,” said County Engineer Frank Scarantino. “In most of the other cases, the clearing that was accomplished was to facilitate utility relocations.”

Now that the clearings are completed, construction crews will move on to building the new entrance and exit lanes, Scarantino said.

“Fortunately, a lot of the construction you see is off-road, so they’re really not impacting traffic that much,” he said.

The work to build the new entrances and exits from the highway will take until July of this year, then crews will get to work realigning roads on the eastern side of the Parkway, Ernst said. That work will take another year, ending some time in July 2016. The third stage will involve shifting utility lines to accommodate the new makeup of the area. Ernst said the county engineering department has been working with JCP&L, Verizon, Comcast and New Jersey Natural Gas to facilitate that work, which will take until Feb. 2017 to complete.

The project will also include seven water features, including two basins on Burrsville Road to help control flooding in the area. The remaining basins, scattered throughout the project area, will help improve water quality by catching suspended solids before they reach groundwater supplies.

The overall goal of the project is to allow access to the Parkway from all local roads, regardless of the direction motorists want to go. The improvements will add seven new traffic lights, but relieve traffic because the lights will be timed to optimize traffic flow and cars accessing the Parkway will be able to exit the local roadways at convenient locations rather than sit through multiple light cycles trying to jockey for position in jug handles and at busy intersections. In most cases, Scarantino said, a driver who would have sat through five light cycles will now only sit through one.

“Pretty much any move you can think of can be made very easily,” he said.