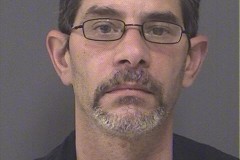 The suspect in a bank robbery that occurred Wednesday morning on East Kennedy Boulevard in Lakewood was apprehended by Brick police officers near a township shopping plaza soon afterward, police said.

Howard Altman, 46, of Point Pleasant, was arrested in the robbery of the Fulton Bank branch at 10:25 a.m. Monday morning, according to Lakewood police.

As police personnel from both Lakewood and Brick began to “flood the area,” police said, Officer Michael Mooney Jr. of Lakewood PD as well as Sgt. David Bedrosian and Officer Mark Storch of Brick PD observed the suspect’s vehicle entering the intersection of Route 88 and Lanes Mill Road.


The officers, with the assistance of other arriving officers from Brick and Lakewood, conducted a motor vehicle stop as the suspect approached the Dorado commuter parking lot, a statement from Lakewood police said. Altman was transported back to the Lakewood Police Department without incident after he was taken into custody.

The investigation into the robbery, conducted by Det. Peter Aakjer and Officer Nathaniel Reyes, resulted in charges against Altman for the armed robbery and theft. Bail was set by Judge Scott Basen in the amount of $85,000 cash.

The investigation is continuing with the assistance of the Ocean County Sheriff’s Department CSI Unit, Lakewood police said.

A photo of Altman was not available.