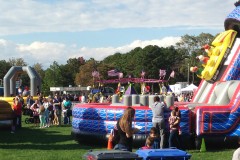 Brick Township is making plans to have plenty of food and fun at Summerfest and Bricktoberfest coming up later this year.

The Township Council on Tuesday night voted for several authorizations for plans for the two popular local events. Summerfest, including live band performances, will be held on July 2, 9, 16 and 23 at Windward Beach on Princeton Avenue and Bricktoberfest will be held Oct. 3 (with a rain date of Oct. 4) at Windward, according to Jennifer Hartman, council secretary.

On March 10 and March 31, the township had advertised bids for a Beer and Wine Garden Concession for the two festivals, but received no bids for either. So council voted Tuesday night for a resolution to permit Township Business Administrator Joanne Bergin to negotiate those contracts, which then have to be approved by a two-thirds vote of council, according to a copy of the resolution.


Similarly, no bids were received when the township advertised for bids on March 10 and March 31 for a Food Truck Concession for Bricktoberfest. So council also voted for the administrator to negotiate the contract, which is then also subject to council approval.

Council also voted to award an amusement park concession contract to Seashore Amusements, 11 Hendry Lane, Brick, which will pay the township $1,200. Seashore was chosen as “the highest responsive and responsible bidder” by the recreation director, who then recommended the award to council, according to a copy of the resolution.

There were also no bids for “pizza, deli and specialty food categories” for Summerfest, so the Thursday evening events will be held without those types of foods, as confirmed by a council vote on Tuesday night. Council President Paul Mummolo said the township received bids for a wide array of hot and grilled food and ice cream and has decided “there will be plenty of food” without the pizza, deli and specialty items.