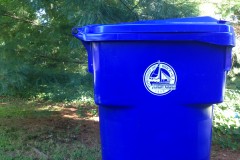 When Brick Township switched to automated recycling in 2013, one of the goals officials had in mind was reducing the township’s annual landfill costs by making it easier for people to recycle items instead of throw them away.

When a resident puts trash out on the curb each week, the township pays, per ton, to dispose of the waste at the Ocean County Landfill. With recycling, however, the township not only avoids paying the landfill bill but makes some money on the raw materials that are ultimately sold on the market.

In 2014, the first full year the recycling program was in place, Brick residents recycled 18 percent more than the year before, said Glenn Campbell, director of the township’s Public Works Department.


As a result, Campbell said, the total landfill fees the township paid in 2014 dropped 8 percent from the previous year, netting taxpayers a savings of $177,000. Likewise, bulk item pickup was reduced in 2014, leading to a $42,434 savings.

Meanwhile, state tonnage grants for Brick will rise by 40 percent for the 2014 calendar year, Campbell said. The actual revenue from the grants has yet to be calculated, however county grants provided the township with about $89,000 in profit sharing revenue, even as a slowdown in the Chinese economy has slashed the price of recycled materials.

Overall, Campbell said, Brick’s Public Works crews made more than 2 million stops in 2014, picked up 32,400 tons of solid waste and 4,700 tons of bulk materials for disposal. About 56,000 residents visited the township recycling center on Ridge Road and the department responded to 56,374 calls from residents.