Fishing Friday: Bass Begin to Invade The Suds, Winter Flounder on the Move 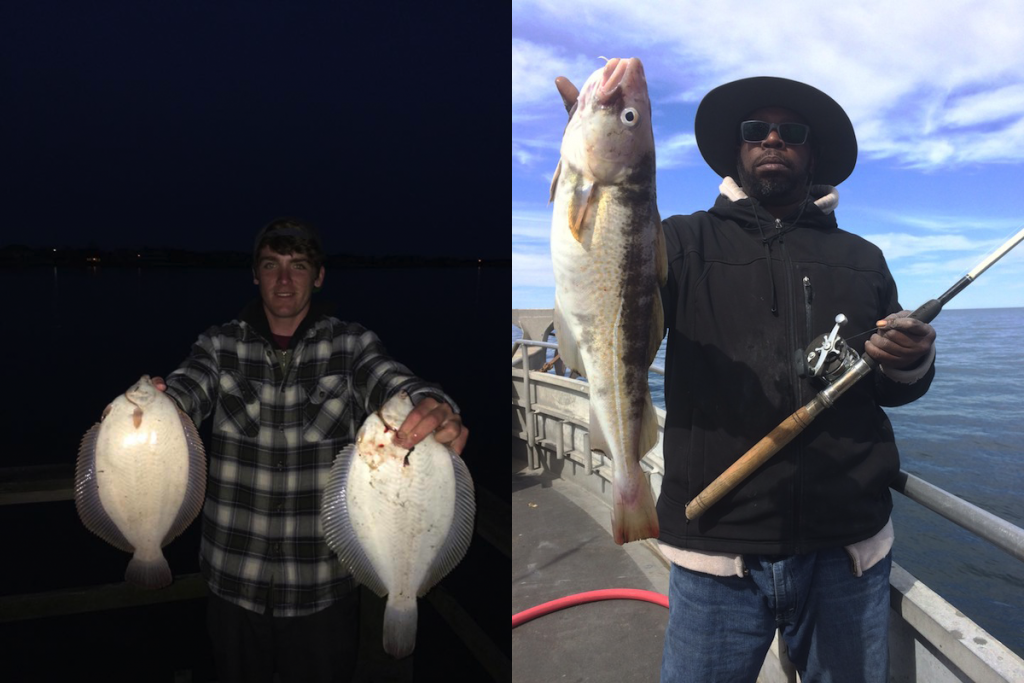 Steven, with flounder caught in the Manasquan River, and Darvelle Attile, with a 4-pound cod caught on board the Paramount party boat. (Photos: Alex’s Inlet B&T, Paramount)

It’s that time of year. Trees budding, birds chirping, temperatures rising – and fish on the move.

We’ll jump right into it this week:

There are definitely some signs that striped bass are beginning to invade the surf, a preview of the annual spring run which will begin in earnest as the water temperatures creep a bit higher. But for now, anglers have started picking up their first catches after the dreadful winter that finally seems to have loosened its grip on the Shore area.


Fresh clams are the ticket in the surf, according to Mario from Murphy’s Hook House in Toms River. No big fish checked in yet, but enough shorts to keep customers happy, the report from the shop said. Still, some of the best action in the area has been on the Toms River, on blood worms and sand worms, clams and small swimmers, “especially before dark and into the night.”

“Great to see some bass being taken both off the surf and in the back bay again,” agreed John from The Dock Outfitters, on the bay off Route 35 in Seaside Heights. “Swimming plugs along with clams are doing the trick on the ocean side while it seems to be mostly worms back behind the shop.”

The shop is starting to intermittently open at night for anglers fishing the spring run, while the weekends hours will be 6 a.m. to 6 p.m., John said.

At Grumpy’s Tackle in Seaside Park, anglers were finding success in the surf with SP & DS Minnows, in particular, as well as clams.

But the big news at Grumpy’s was the bluefish bite on Barnegat Bay.

“The blues have hit the bay!” a report from the shop Thursday exclaimed. A few were caught Wednesday night, and as the shop’s staff knows, blues travel in schools.

Winter flounder are on the move, but still making an impact. Mario at Murphy’s said there’s a new leader in the shop’s winter flounder contest – a 2.56-pounder that customer Paul Enright caught fishing the bay in Mantoloking. The fish was caught on a blood worm. There are still flounder hanging around Oyster Creek in Lacey Township, but the bulk of the fish are now being caught between the Mantoloking Bridge and the Manasquan River as they make their way toward the Atlantic Ocean.

“Flounder are here and ready to go right to your stove,” a report from Alex’s Inlet Bait and Tackle, on the Manasquan Inlet in Point Pleasant Beach, said. On the Manasquan and at the inlet, the best time to fish is two hours before and two hours after high tide, the report said.

“The flounder fishing in the river is getting better and better by the day,” the report said. The shop was expecting a new shipment of blood worms and fresh clams Friday.

In the ocean, “the wreckmasters” on board the Paramount party boat out of Brielle have been picking up cod and ling on their daily trips.

Still, keepers have been boated on every recent trip. The Paramount sails daily 6:30 a.m. to 5 p.m. as long as weather permits.

As usual, we welcome your catch photos and would love to feature locals in this column and other fishing features. Send them right over to me, daniel@shorebeat.com, and we’ll make sure you get some bragging rights!