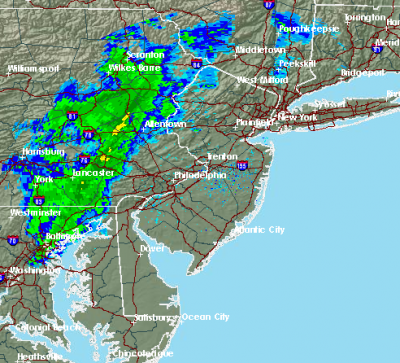 Thunderstorms on the way – the radar at about 2 p.m. Wednesday. (Credit: NWS)

A cold front could produce strong thunderstorms Wednesday afternoon, the National Weather Service advised, which could pack winds that could gust to 40-50 m.p.h.

A Special Weather Statement issued by the NWS’s office in Mount Holly said the cold front will move through during the afternoon and produce showers and thunderstorms across the region until about 8 p.m. tonight. Strong above-ground winds and cold air below cloud level will corroborate to produce the gusty winds, the statement said.

The gusty winds will be produce “in and near” precipitation, which could include some small hail, the statement said. In areas that are not affected by precipitation, wind gusts could reach 35 to 40 m.p.h.


Rainfall amounts between a tenth and quarter of an inch are expected, except higher amounts where thunderstorms strike, a forecast said. The showers and thunderstorm threat will continue until 8 p.m., after which just a chance of showers will remain.

Clouds will remain Thursday, which will have a high of just 55 degrees. The overnight low between Wednesday and Thursday will dip to 38 degrees.