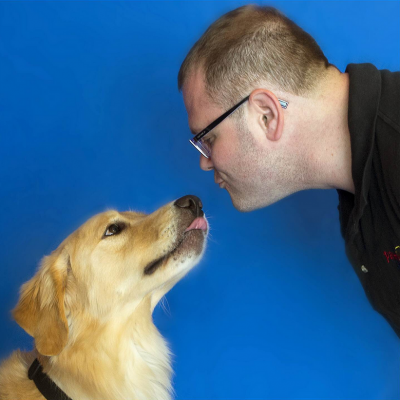 “The cameras didn’t see us going through an Iraqi school that was opened for the first time, helping out the kids,” explained Adam Campbell, a U.S. Army veteran who grew up in Lakewood and served on the front lines during four tours of Iraq and Afghanistan. “I was very proud.”

The cameras also rarely showed the true horror of war.

“I was blown up two times in three minutes,” Campbell, who served as a sniper, said. “The first was an IED. We were going toward the target. A minute to two minutes after we made contact, RPGs started to fly.”


Campbell, now 31, was paralyzed for nearly 10 months, and spent almost two years in the hospital following the attack. But over time, his wounds began to heal, and with plenty of hard work, his strength began to return.

“I started getting better physically,” he said. “Physical was easy for me; the Army taught me how to do physical training. The mental situation was very far gone.”

It’s a story that has hit home for countless veterans returning from war. Campbell said he returned to New Jersey after joining the Army following graduation from Lakewood High School in 2002, but home was a different place after so many years away.

“When I came back, everyone was projecting who they wanted me to see rather than who they really were,” Campbell recalled. “I really couldn’t talk to everybody because I felt like I missed everything. You come back expecting a certain structure and network of friends, but when you leave, everything changes. I saw the best in people and I saw the worst in people.”

Campbell became depressed, had frequent nightmares, stopped talking to his friends and family members, and couldn’t hold a job. All that, of course, was happening while he was also getting used to life with the physical challenges that remained from his injuries. The downward spiral seemed like it had no end.

“I didn’t want to deal with anything,” said Campbell.

That is, until he made a friend who changed his life, on the recommendation of another veteran who had a similar experience.

That friend is Kenan, a mixed breed dog from an organization called paws4vets, which matches veterans with service dogs who help with physical complications, mental health issues and the trials and tribulations of daily life that come easy for everyone else, but come with obstacles for those who have gone through horrific experiences on the battlefield.

Paws4Vets has an innovative formula – a returning veteran lucky enough to be accepted into the program spends days, sometimes weeks, meeting three or four trained service dogs at a time where they are initially raised by inmates at one of five prisons in West Virginia until a match is found. The person doesn’t choose the dog; the dog chooses the person through what is called a “bump,” the phrase used for the nudge a service dog will give when he or she feels a special connection with a human.

The organization works on a “pay it forward” system, where veterans who have received service dogs work to help raise money so others can have the same privilege. Locally, enter Mike Jurusz of Brick, owner of Chef Mike’s ABG in South Seaside Park, who befriended Campbell and offered up his oceanfront restaurant for a day-long fund-raiser for paws4vets. The fundraiser will be held this coming Sunday, May 17, and will feature food from numerous Shore area restaurants, beer and wine from New Jersey microbreweries and wineries, a gift auction and the chance to see paws4vets’ service dogs close up.

“It’s a tremendous, tremendous organization,” said Jurusz. “This is something really near and dear to me. I’m a huge supporter of our military and our veterans, and for me, it’s a no-brainer.”

Jurusz said he has spoken with veterans whose dogs lie next to them in an embrace at night when they have nightmares, sense oncoming seizures and know almost instinctively when their partner is upset, depressed or just in need of some company.

“When I tell you that my dog is bonded to me and legitimately loves me, you just can’t understand it,” he explained. “Kenan knows when I go from cold to hot. He knows when I get angry, when I get depressed. If I get depressed, he’s there within a minute with his head on my lap, just kind of saying, ‘do you want to throw a ball?’”

For warriors accustomed to military tradition and bravery on the battlefield, asking for help is often a challenge – a challenge that is made easier by having a loyal companion.

Before getting Kenan, “I was just a mean person,” Campbell recalled. “Confused, depressed, frustrated, and there was not a lot of light coming in my windows. I had more excuses than most to stay in my bed. Now, no matter what, I have to wake up because he has to go to the bathroom. I make sure he gets fed and he goes outside. When I walk around, people see the dog and they instantly smile. Suddenly, most people in my universe were happy. That makes things so much easier for me.”

Campbell’s life, with the help of Kenan, has turned an amazing corner. Campbell now works as a contracting officer with the Veterans Administration, and brings his best friend to the office every day.

“No matter what, lunch time is my break, and I take him out every single day and we throw a ball around,” said Campbell. “If I get flustered or aggravated, I can just walk outside and play with the dog. It is paramount to my well-being and my relaxed state of mind.”

Breeding and training a service dog costs more than $10,000, according to paws4vets. Jurusz said the goal for the outdoor beach party at his restaurant is to raise between $50,000 and $100,000.

The paws4vets Beach Party Benefit will take place this Sunday, May 17, from 12 noon to 4 p.m. The price is $50 for adults and $20 for children, and will feature food from Chef Mike’s ABG, Joe Leone’s, Brandl, Poached Pear Bistro, Drew’s Bayshore Bistro, among others, plus wine and beer from several wineries and breweries. The event will also include sand art, face painting and crafts for children, as well as speakers (and dogs) from paws4vets.

All of the food is donated, and all proceeds from the benefit will go to paws4vets as part of Campbell’s “pay it forward” campaign.

Tickets for the benefit can be purchased online or at the door. The restaurant is located at 24th and Central avenues, South Seaside Park, just outside the entrance to Island Beach State Park.

“I can honestly say I wouldn’t be here if not for Kenan,” said Campbell. “He’s not just a dog, he enables me to live my life.” 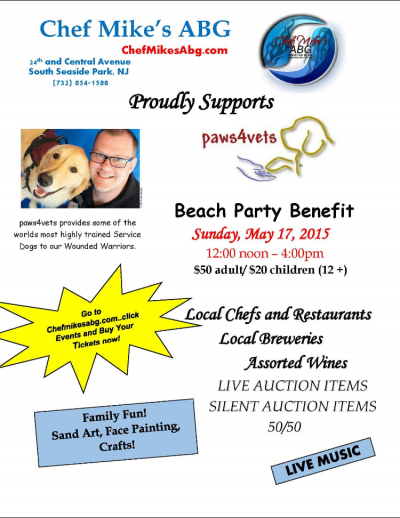