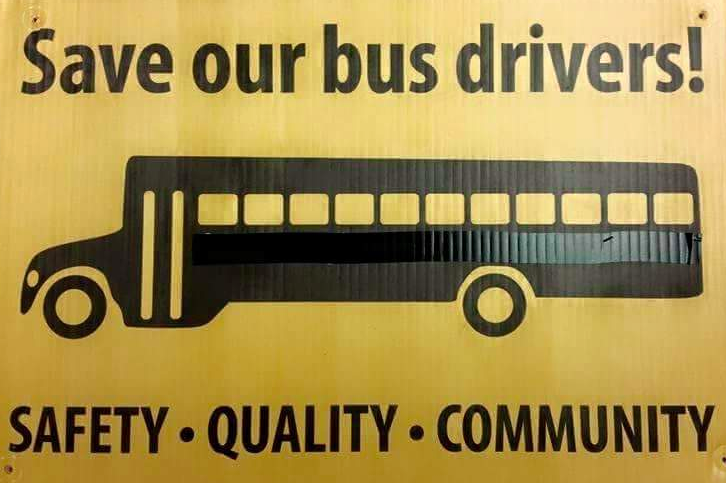 Brick school bus drivers are expected to protest the proposed elimination of 31 full-time driver positions at a Board of Education meeting scheduled for Thursday night.

Drivers have been posting signs in certain areas of the township and circulating literature asking for support over the past week, as the school district waits on a decision from the state Civil Service Commission on whether their plan to shed full-time driver positions and replace them with part-time and contracted drivers is approved.

Last month, school officials said that bus runs to private schools could be contracted out to the Monmouth-Ocean Educational Services Commission and other efficiencies would be considered for Brick’s public school students. The debate over the drivers centers not on salaries, but the cost of health benefits, Shorebeat has learned. Earlier this year, the district left the state health insurance plan due to mounting costs, as the premium on a family health plan rose to approximately $30,000 per year, per family. That expensive plan was the most popular plan among employees, officials said at the time. The district ultimately chose to purchase insurance for its employees directly from Horizon Blue Cross Blue Shield, though the premiums remained higher than they were in years past. Part-time bus drivers would not be eligible for health care coverage under the law.


Bus drivers (none of whom wished to be directly quoted) have confidentially told Shorebeat over the past week that they are concerned not only over losing the positions, but having to deal with longer bus runs next year if the plan goes through.

Bus drivers are expected to protest the layoff plan, which is the subject of a grievance filed by the Transport Workers Union, at Thursday’s meeting. A flyer distributed around town over the past week asked for support from the public, urging members of the community to oppose “strangers” driving their children to school. Another sign pleaded to “Save Our Bus Drivers” and was accompanied by the slogan, “Safety, Quality, Community.”

The meeting is scheduled to begin at 7 p.m. at Brick Township High School.