A driver has been arrested after a local resident’s dash cam video caught him swerving into the opposing lane of traffic and passing a stopped school bus that was picking up students on County Line Road in Lakewood.

The Ocean County Prosecutor’s Office caught wind of the video after it was posted by local news site The Lakewood Scoop. 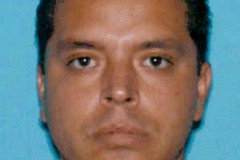 “We at OCPO saw the video and were amazed at the driver’s blatant disregard for the safety of others and the NJ Motor Vehicle Statutes,” said Al Della Fave, spokesman for the prosecutor’s office.

The case was assigned to Detective Sgt. Michael Cecchini of the prosecutor’s office, who partnered with Lakewood Police Traffic Division Ptl. David Silberstein. Together they investigated the motor vehicle incident, which took place Thursday morning on E. County Line Road and Apple Street at approximately 7:23 am.

The video shows a green Ford F-150 pickup truck passing a stopped school bus over a double yellow line while the school bus had its red lights on and was taking on passengers. Cecchini and Silberstein quickly identified, tracked and located the offender, Della Fave said.

By 4:30 pm Thursday, Alfonso D. Rodriguez-Rojas, 36, of Lakewood was issued summons for reckless driving, improper passing, passing a stopped school bus, and driving with a suspended driver’s license. His mandatory court appearance is set for June 11 in Lakewood Municipal Court.

“OCPO thanks those who drive responsibly and pledges the commitment of the entire Ocean County Law Enforcement community to keep our roadways safe,” Della Fave said.