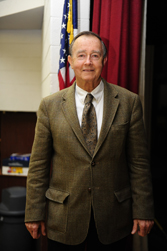 Brick Township Board of Education members deadlocked on seven separate votes that were held at a board meeting Thursday night on who should fill the board seat left open by John Talty’s resignation.

Talty resigned in April after undergoing open heart surgery when his recovery was not moving as fast as he expected. But his medical condition quickly improved after the resignation, which he asked to rescind. Three board members, John Barton, Frank Pannucci, Jr., and Michael Conti, voted against a motion to reinstate Talty. Interviews were held by the board to fill the seat, in which Talty participated, but Barton, Pannucci and Conti favored Brenda Calderone to take the seat. Calderone ran on a ticket with Pannucci and Conti in 2012 but did not win a seat on the board.

When a board cannot decide on who should fill an open seat, the county executive schools superintendent appoints a candidate to fill the spot, but Board President Sharon Cantillo said during a board meeting Thursday that Todd C. Flora, the interim Ocean County executive superintendent, instructed her to bring the matter to the full board for a second try to come to a consensus.


“He does not want to do this unless he absolutely has to,” Cantillo said.

Talty, who has garnered considerable support at board meetings from members of the public, was the first candidate to be nominated Thursday night.

“If Mr. Talty had to do it over again, I don’t think he would have resigned,” said John O’Rourke, a West Lake Drive resident. “He would have asked for a leave of absence. He’s feeling healthy right now and I think he would like to finish out his term. I think those who’ve not voted for him in the past should consider voting for him at this point in time.”

The vote ended in the same result as previous attempts, with Barton, Pannucci and Conti voting against appointing Talty, and Cantillo, Susan Suter and Karyn Cusanelli voting in favor of appointing him.

After the tie vote, Pannucci motioned to appoint George White, a retired teacher and administrator in Jackson Township who applied for the position. Pannucci said White, who apparently served as a commissioner on the Brick Township Municipal Utilities Authority in the 1980s, would offer the board a “fresh perspective.”

“I have no political agenda, I have no social agenda,” said White, on June 8, when he was interviewed by the board. “I submit my resume simply because I’d like to do something to improve education.”

Some board members expressed concern that White had never previously attended board meetings or expressed an interest in being involved with the district – making his views on issues affecting the district largely unknown. White was not present at Thursday night’s board meeting when a member of the public asked him to stand up if he was in the room.

“I don’t understand how someone – and I respect the fact that this gentleman has a masters degree – who has never graced us with his presence at a board meeting came out of nowhere,” said Cantillo. “As far as a fresh perspective, I don’t know what a fresh perspective is going to do at this point, when you need someone who is experienced.”

The vote on White’s appointment ultimately deadlocked, with Barton, Pannucci and Conti voting in favor of the appointment and Cantillo, Suter and Cusanelli voting against it.

The board continued to deadlock on votes to appoint former board members Walter Campbell and Larry Reid to the seat, as well as nominations to appoint Lois Turner, Lenny Figula and a second, last-ditch effort to appoint Talty.

The back-and-forth volley of votes was briefly interrupted when a visibly upset Calderone walked up the microphone during a public comment period and loudly denounced board members and members of the public who she believed called her a “political hack.”

“First of all, I have no political affiliation with anyone who voted for me,” said Calderone, declaring that she is a Democrat even though she ran for the board alongside Pannucci and Conti, who are currently Republican candidates for township council.

With all seven votes having failed, the matter will now be forwarded to Flora, who will essentially restart the search process with a legal advertisement announcing a board vacancy. Cantillo said Flora has indicated that he will review the resumes and personally conduct interviews before naming a person to fill the open seat.

Whoever Flora appoints will only serve until the end of the year, as the seat will be up for a public vote on the November election ballot.

“I don’t want to see somebody come up here who is a Republican or a Democrat,” said resident Vic Fanelli. “It’s not a political appointment or a political arena. This is a school district.”

“Maybe I’ll scare the hell out of all of you and put my name in tomorrow,” he added.