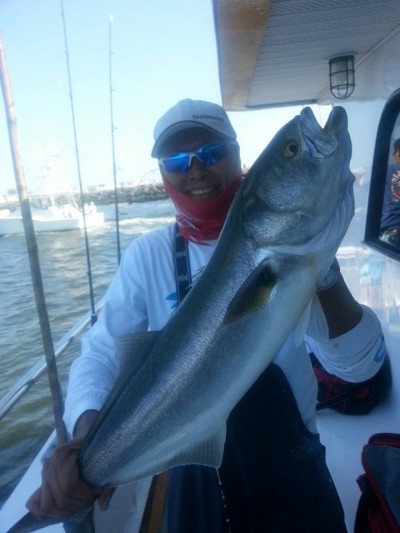 As the temperatures finally begin to resemble summer, fishing is likewise heating up. We have a bit of an abbreviated report this week since I’m out of town taking care of some business, but here goes:

Sea bass have been biting this week at the Sea Girt Reef, said Pete from Pell’s Fish & Sport on Mantoloking Road. Meanwhile, stripers have been showing up at the end of anglers’ lines in decent numbers in recent days.

Rich Smith had two keeper bass from the surf at Long Branch throwing his favorite Hopkins lure, Pete said. In between the bass, Rich also bagged a 21-inch fluke on the same lure. On Wednesday, Capt. Joe of the Pell’s staff reported an abundance of bunker from the Manasquan Inlet south to Lavallette. Joe worked the pods and managed to raise one nice bass.


On Wednesday three head boats (and small boats) jigged cocktail blues at the mouth of the Manasquan Inlet, according to Pete’s report.

There was a bluefish blitz on the beach in Lavallette Wednesday morning this week, according to the folks at The Dock Outfitters in Seaside Heights. Blues are being caught at both Manasquan and Barnegat Inlets, according to John from the shop.

“No real fluke reports from the ocean side yet,” John said.

Both Pete and John agreed crabbing was beginning to heat up all over Barnegat Bay, especially the northern portion.