Indictment For Man Who Drove On Ice, Leading to Dog’s Death

Andrew Mayer, the driver of a truck that fell through the ice in the Toms River. (Images: NJSP/USCG)

An Ocean County grand jury this week handed up and indictment against a Toms River man who prosecutors say drove his pickup truck on the ice-covered Toms River March 1, a decision that led to the death of his dog when the vehicle fell through. 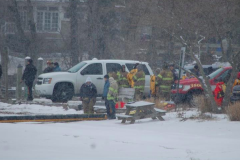 A search operation after a vehicle crashed through the ice in Toms River, March 1, 2015. (Photo: Ocean County Prosecutor’s Office)

Mayer is released on his own recognizance to appear in court on a future date. The maximum he could face on each charge would be five years in New Jersey State Prison, Della Fave said.

The animal cruelty indictment stems from the allegation that Mayer “knowingly or recklessly failed to provide necessary care for and protection of his dog,” Rolo, from harm by driving his pickup truck onto the frozen river, resulting in the dog’s death.

The criminal mischief indictment is due to the fact that Mayer failed to notify authorities of the incident when he got safely to shore, resulting in an immense rescue operation that took place for hours involving the United States Coast Guard’s Aviation Unit, the New Jersey State Police aviation and marine units, multiple local police departments, fire companies and first aid squads from Toms River, Beachwood, Pine Beach and Island Heights.