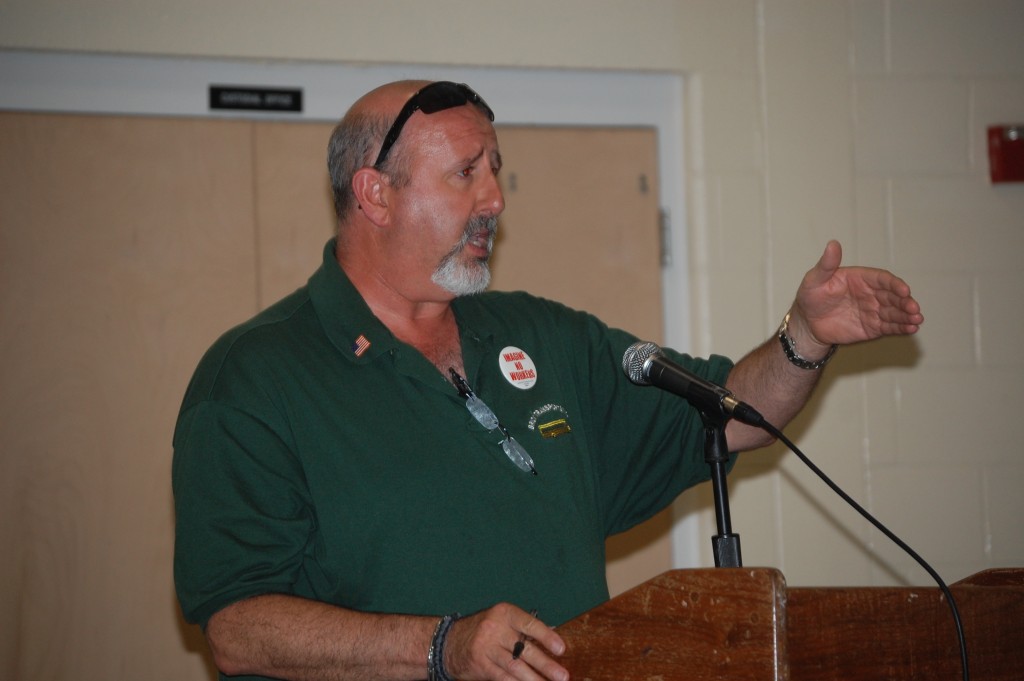 The Brick Township school district has found itself caught between a rock and a hard place, with school board members seeking to save bus drivers’ jobs despite making the decision in April to approve a budget that sheds 31 positions.

A nearly five hour-long special meeting of the board was held Monday night that was essentially a repeat of a meeting held last month where the issue of bus driver layoffs was brought up. Drivers attended Monday night’s meeting en masse, and for the second time in several weeks, told board members that there are numerous management issues that bring down morale, complicate bus routes and make drivers’ jobs more difficult while delaying students getting to and from school.

“I think more time should have been spent researching this,” John Menshon, president of Transport Workers Union Local 225 Branch 4, the union which represents the district’s drivers, told board members. “How do you pass a budget and not know what’s in it?”


Board members said they were given poor information on absenteeism rates and other issues by management in the district’s transportation department and used that information in favoring a restructuring of the department which includes the staff cuts.

Nicole Pappalardo, a supervisory bus driver, said cutting bus drivers would only make a bad situation in the district worse.

“It’s stressful, it’s frustrating,” Pappalardo said. “We can’t even speak by the time we get home at night with the way things are being run.”

As more bus drivers spoke at the meeting, board members seemed to be convinced that at least some layoffs should be avoided. But that led to a discussion on a serious problem: the district’s 2015-16 budget includes more than $1 million in savings stemming from the layoffs.

Some layoffs may be inevitable. According to state law, school districts must work with a regional education commission to price bus runs for out-of-district private and parochial schools, as well as out-of-district vocational schools and county academies. Brick has often used its own drivers to bus students in these scenarios in the past.

“We were called out on this by the county superintendent,” said Interim Superintendent Rich Caldes.

If Brick’s drivers can provide transportation for students cheaper than a contractor hired by the Monmouth-Ocean Educational Services Commission, the Brick drivers can continue to bus those students. But if MOESC beats Brick’s cost, contractors must be used in order to save taxpayer dollars, the law states.

In all, 11 bus drivers’ jobs would be eliminated if MOESC comes through with a lower price of out-of-district transportation. Whether or not those 11 drivers will be able to be retained will not be known until MOESC notifies Brick school officials of the transportation rates for its routes, which is not expected until the end of July.

The issue the district was facing going into Monday’s meeting was whether layoff notices should be filed against the 24 drivers whose jobs may be in jeopardy, between the out-of-district runs and what would be condensed in-district runs under the 2015-16 budget. If all 24 drivers were to be retained, the district would not have the money to fund their salaries and benefits since the budget passed by the board and approved by the county and state did not include them.

At one point during the meeting, board member John Barton made a motion stating that the layoff plan should be tabled and not filed with the state Civil Service Commission until a seventh board member is appointed by the county superintendent to take the place of John Talty, who resigned due to health reasons. Barton’s motion was seconded by board member Frank Pannucci, Jr.

The motion, board attorney Jack Sahradnik said, may have been effectively illegal, since the board does not have the power to compel the district’s appointing authority – in Brick’s case, the human resources director – from filing the layoff plan with the state if the district truly could not pay the salaries of the employees in question.

Business Administrator James Edwards said if the layoff plan was not filed, the drivers would have to be retained even if the district did not have enough money to pay them. In that case, he said, he could not certify the district’s financial well-being with the county and state, which would most likely lead to a state monitor taking over the Brick district.

“If you get through the process and nothing changes by the end of that period, by that point in time you’ll be having expenses you have to fund that are not in the budget,” said Sahradnik.

State monitors are appointed to oversee the business of struggling school districts, such as Lakewood. The monitor would effectively put the district under the control of the state, and would be able to overrule the local school board, business administrator and even educational decisions made by the superintendent.

“When I can’t give you that certification, we start getting into the grounds of the state Commissioner of Education appointing a monitor,” said Edwards, of a case in which the layoff plan was not filed. “There are too many variables at this point in our budget to tell you in June that we have enough money to make it until the following June.”

“We have a responsibility to do what’s ethically and legally correct,” said Caldes. “We are putting ourselves in jeopardy at some point.”

Realizing the dire nature of the situation, Barton rescinded his motion even though he had “two other people ready to vote with me.”

“I wouldn’t want to do that to the district and bring that kind of attention to the school system,” said Barton. “It’s not very classy to do that.”

“If a state monitor were to come in, there would be even less of a chance of saving any jobs,” said Pannucci, who rescinded his seconding of Barton’s motion to hold off on filing the layoff plan. “An absolutely zero chance.”

The layoff plan, Edwards said, should have been filed with the state May 1. It will likely be filed now, though just because a layoff plan is filed does not mean it must be acted upon. If the district is able to find savings through negotiations with the TWU, allocate additional funds or learn that the district can provide out-of-district transportation cheaper than MOESC’s contractor, jobs can be saved regardless of the layoff plan, which represents the maximum number of positions that can be eliminated.

Monday’s meeting provided little in the way of answers to bus drivers who are worried about their jobs, though board members seemed committed to looking into the issue further and reworking the layoff plan.

“None of us up here want to see any of you lose your jobs,” Board President Sharon Cantillo said.