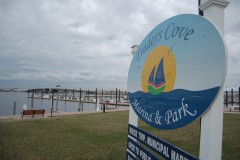 Brick Township officials have been successful in attracting the interest of a number of highly regarded restaurant owners in its plan to host a restaurant and banquet facility at Traders Cove Marina and Park.

Mayor John Ducey said the prospect of opening a bayfront restaurant centrally located between the mainland and barrier island has been met with a positive response. The township has been soliciting bids from restaurant owners for several months and is expected to complete the process in September.

“It’s not going to be a snack bar,” Ducey said. “It’s a building that will have a substantial cost to it. It’s going to be a very nice place.”


Township officials have said from the beginning when the plan was announced that they would be seeking a locally-owned, upscale bidder to build and operate the restaurant, which would ideally include a banquet facility.

Ducey said restaurateurs including Tim McLoone, and the owners of Harpoon Willie’s, Martell’s, River Rock and higher-end restaurant in North Jersey have expressed an interest in a Traders Cove venture.

The township has received approval from the state’s Green Acres program to move forward with the restaurant plan. The construction of an additional building at the site was always included in its planning, though there was debate as to what purpose it was to serve. Had the plan not been put out to bid, the township may have been required to build a facility there under a previous Green Acres plan, the mayor said.

Between construction, permitting and other costs, building a restaurant at Traders Cove will likely be a project worth at least $2 million.

“Personally, I think it will be really nice to have a lovely dinner, waterside, and appreciate Barnegat Bay,” said Councilwoman Susan Lydecker.

The plan has faced opposition from environmental group Save Barnegat Bay, whose members have said a restaurant at the site could curtail public access. Township officials have held the opposite view.

“There are a lot of people who don’t fish, don’t jet-ski, don’t like being out in the sun, and the only way they see the waterfront is to have a restaurant there or a banquet there,” Ducey said.