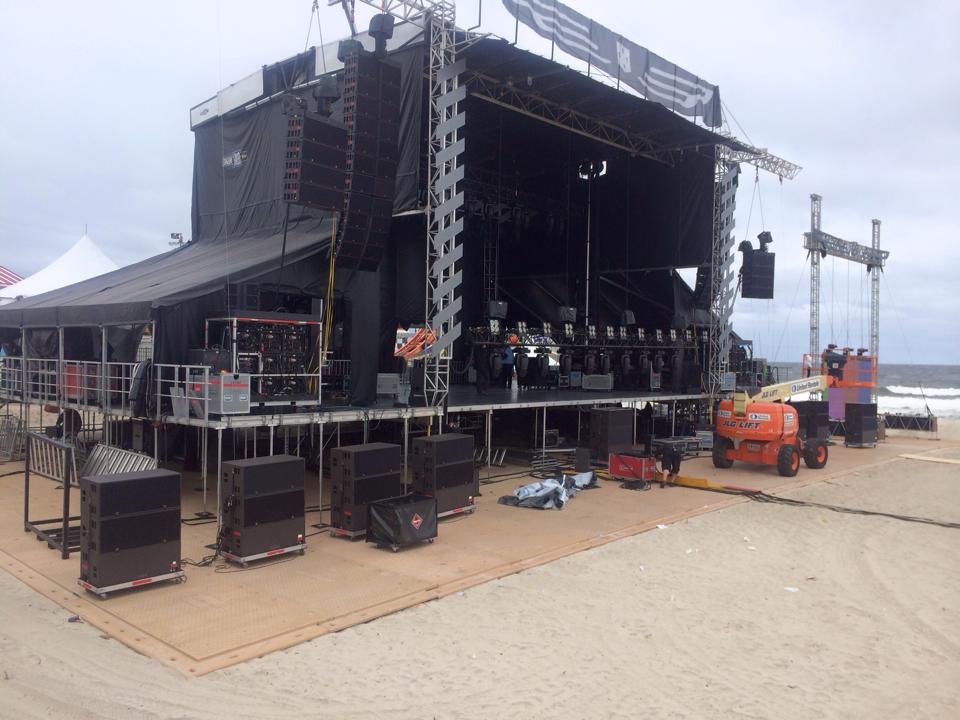 A stage set up at Grant Avenue for the Gentlemen of the Road tour in Seaside Heights.

Seaside Heights is urging visitors who are not in town for the Gentlemen of the Road music festival this weekend to consider heading to Seaside Park or Lavallette instead.

The message issued by borough officials on Thursday predicted heavy traffic delays as the beachfront concert, featuring headliners Mumford and Sons, will lead to more than 35,000 attendees flooding Seaside Heights. The borough’s beaches officially closed Thursday and will reopen Monday. Seaside Heights beach badges will be honored by Seaside Park this weekend. 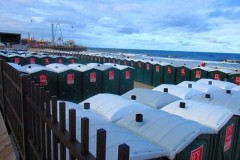 Portable toilets ready for use on the Seaside Heights beachfront.

Over the past two days, crews were busy setting up a large stage on the Grant Avenue beach, as well as beer tents, a sea of portable toilets and space for thousands of campers who will pitch tents on the beach. General admission tickets for the event, which will feature a mix of folk and rock artists, were selling for about $70 on StubHub.com.

“Think of this weekend as an extra 4th of July weekend for Seaside Heights while surrounding municipalities will be having their usual first weekend of June,” a notice from the borough said, warning of traffic delays.

The Route 37 bridge over Barnegat Bay will remain open, though some streets in Seaside Heights will be closed. Additionally, campers were being directed by signs to park in various locations in Ortley Beach, which will doubtlessly lead to a parking crunch in that neighborhood.

The concert’s promoter is providing a shuttle service from Toms River High School North, Toms River High School East and Toms River Intermediate School North for festival ticket holders, which employees of Seaside Heights businesses are aso welcome to use. Concertgoers and workers can park their cars in those lots and board the shuttle busses which will drop them off at Stockton Avenue in Seaside Park. The shuttles will run until 3 a.m. each night of the festival.

As for road closures:

Parking is expected to be extremely limited throughout the borough. Seaside Heights will be operating a complimentary school bus shuttle service along Ocean Avenue in Seaside Park from 14th Avenue to Stockton Avenue from 10 a.m. to 4 a.m. Friday and Saturday. Those who want to ride should flag down the bus; there are no specific stops.