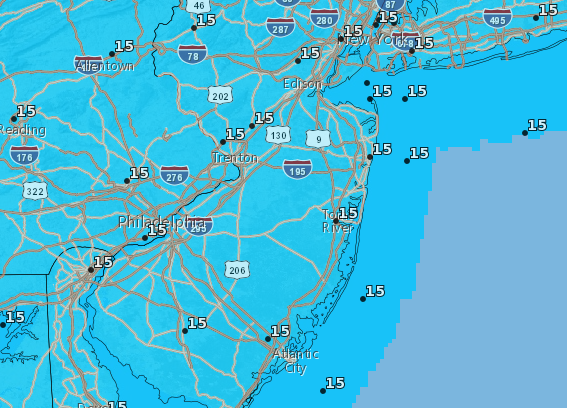 Meteorologists are warning Shore residents of the threat of severe thunderstorms Tuesday afternoon and into the evening hours.

The storms will move in around 5 p.m., according to the National Weather Service office in Mount Holly, which is predicting a 60 percent chance of precipitation, as the thunderstorms will be scattered across the region.

“Some storms could be severe, with gusty winds, heavy rain, and frequent lightning,” a forecast released by the office said.


Before the storms move in Tuesday, forecasters are calling for partly sunny skies and a high near 90 degrees with a southwest wind blowing 15 to 18 m.p.h.

Meteorologist Nick Pittman of SNJ Today, said the storms will likely form to the northwest of the Shore area and move in a southeasterly direction.

“A large squall line will likely form in northeast PA and push southeast through the evening hours,” Pittman said via social media.

Pittman said storms could contain wind gusts of up to 60 m.p.h. and heavy rain, though it will likely be a “nowcasting” even since there is no way to tell which areas will get the worst of the predicted storms until they arrive.

The NWS office said the thunderstorms should move out by about 8 p.m. Tuesday with the entire storm system exiting by 10 p.m. Skies will then clear gradually, and the sun will return Wednesday with a high of 85 degrees. The NWS is predicting new rainfall amounts between a tenth and quarter of an inch, except higher amounts possible in thunderstorms