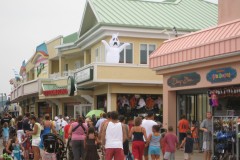 Point Pleasant Beach’s ordinance prohibiting public parking on certain borough street between the hours of midnight and 6 a.m. is invalid, a panel of judges ruled Monday.

None of the borough’s several ordinances on the matter were valid, first because one council member, Michael Corbally, was a realtor and stated publicly that he and his employer could benefit financially from the law, and in a second vote (when Corbally was no longer a member of council) because only two members of the governing body voted to introduce the ordinance, lacking a quorum.


The regulations were the subject of a heated debate. Mayor Vincent Barrella supported not only the parking limitations, but a separate measure restricting the closing time of bars and nightclubs on the borough’s boardwalk to 12 midnight unless they paid the borough a five-figure fee. The state’s Alcoholic Beverage Commission invalidated the closing time rules, which were contested by Jenkinson’s and Martell’s, two boardwalk bar owners. Barrella, through the debate over the closing time and parking regulations, had been accused of targeting boardwalk businesses and trying to force their closure, but the mayor held that he was concerned with reducing noise and crime in the district of town that is closest to its popular boardwalk.

The parking ordinance has had a significant affect on the revenue in one boardwalk bar, a supervisory employee of the bar told Shorebeat on the condition the employee’s name would not be revealed publicly. Though the parking ordinance only applies to borough-owned streets, not county-owned streets, and is only in effect from the Monday before Memorial Day to the Monday after Labor Day, local residents are unaware of the details and have stopped patronizing the bars, the employee said. Since the law was passed, Jenks Club, a popular nightclub that was previously open year-round, has started closing its doors during the winter months.

The closing time for bars in Point Pleasant Beach remain at 2 a.m. It was not immediately known if fines paid by those who violated the ordinance would have to be refunded since the ordinance was invalidly introduced.