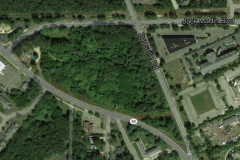 A developer has submitted a formal proposal to build a 103 room hotel, 66 apartments and 39,475 square feet of retail space for an undeveloped lot on Route 88.

The location of the development, proposed by  The Kamson Corporation of Englewood, would be a 9.39-acre triangular plot of land across the street from the Brick Township Municipal Utilities Authority offices. The development would run from Route 88 back toward the intersection of Burrsville Road and Jack Martin Boulevard.

The lot is mostly vacant, though there is a 1.5-story frame dwelling, associated accessory structures such as trailers and sheds, and a billboard, all of which are proposed to be removed in connection with the development of the mixed use project.


According to Kamson’s filing with the planning board, the company will not seek any bulk or use variances associated with the project, but will seek design waivers for parking stall width and drive aisle width for the hotel portion of the proposed parking lot. The development will include parking lots for each use – the hotel, retail space and residential units – as well as internal roads, lighting, landscaping, outdoor plazas, a basketball court and stormwater maintenance facilities.

The project is expected to be heard by the township’s planning board July 22. It was initially scheduled to be heard June 24, but was postponed due to an issue with public notice requirements, Township Planner Michael Fowler said.

The prospect of a hotel being built at the site was first raised by Mayor John Ducey last fall, when he said Marriott was interested in developing the site. Ducey said at the time that the residential space would be located above the retail portion.

(Editor’s Note: This article initially stated the property on which the hotel is proposed was rezoned for mixed-use development earlier this year. The property was actually rezoned as “mixed use” in 2007.)