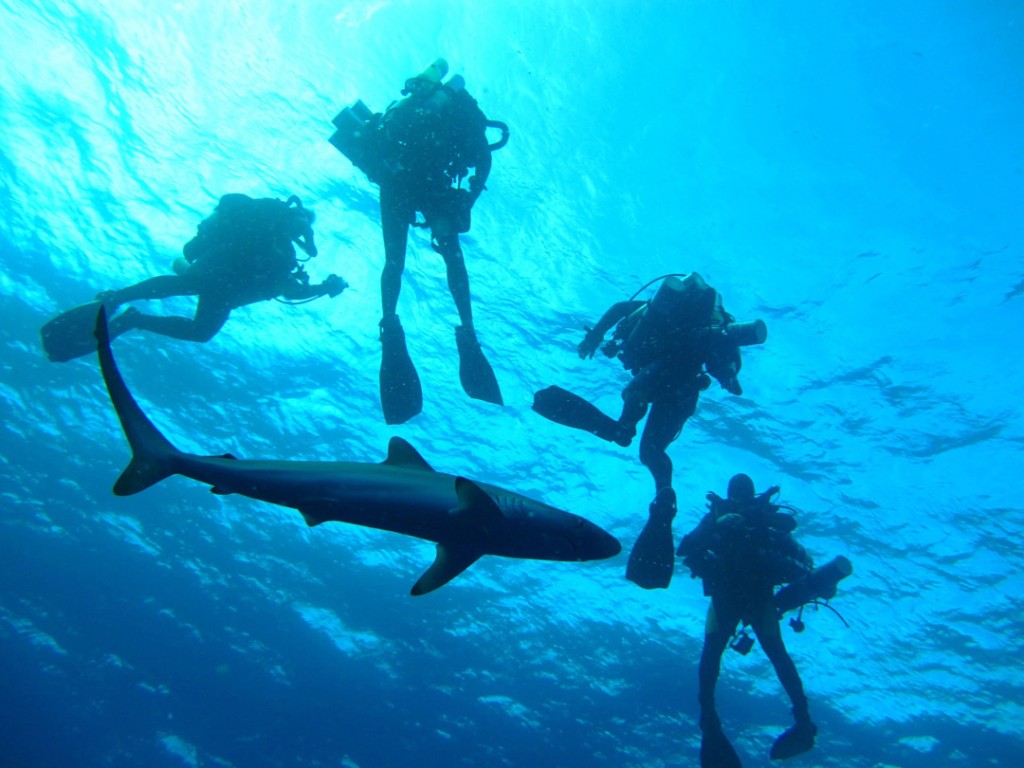 A group of researchers dive with sharks off the Florida coast. (Photo: Robbie Christian, University of Miami / NOAA Ocean Explorer.)

Millions of Americans will spend the next six nights watching hours of documentaries on sharks as part of the Discovery Channel’s “Shark Week,” an annual summer tradition that ratchets up interest in the most infamous fish in the sea. For Brick resident Steve Nagiewicz, it’s a chance to impart an important message about the ocean’s most maligned species: sharks are worth saving.

“Nobody loves sharks,” Nagiewicz said, amidst near-daily reports of shark attacks occurring in North Carolina. “When you’re in the shark-saving business and everybody hates your subject, it’s hard to convince them otherwise.”

The interest in Shark Week, as well as the viral craze two months ago as the Internet watched Mary Lee – a great white shark outfitted with a tracking device that made an appearance in the waters off the Jersey Shore – proves America is interested in sharks, but the species’ status as being on top of the food chain, as well as a potential danger to swimmers, means that necessary protections fall by the wayside. That is what Nagiewicz, who has been featured on the Discovery Channel, Nat Geo, and Fox shows on sharks, is trying to emphasize.


Nagiewicz is chairman of the Shark Research Institute, a Princeton-based nonprofit organization that is committed to protecting sharks from an even larger predator – humans. The group has advocated for state-by-state laws banning the practice of “finning,” in which sharks are caught so their fins can be cut off, leaving the shark to be returned to the ocean alive and unable to swim, leading to suffocation, attacks from other creatures and ultimately, death.

New Jersey has yet to pass an anti-finning law, though a bill has passed the state Senate and is now making its way through the General Assembly. Nagiewicz estimates 10,000 sharks are killed each day for their fins.

Finning violates federal regulations, but advocates say the practice still exists in the United States, necessitating bills such A-1145, which would make it illegal to possess or sell shark fins in New Jersey. New York has already enacted a similar law, according to the Humane Society of the United States. Worldwide, it is estimated that between 26 and 73 million sharks are killed for their fins each year.

“Our ongoing state efforts to cut off markets for shark fins will tamp down the U.S.’s role in the trade,” the Humane Society said in a statement on the bill earlier this year.

If such a practice were occurring with another species, there would be a much larger uproar, Nagiewicz believes. But with the perceived danger that emanates from the idea of swimming in “shark-infested waters,” and the cultural impact that the movie Jaws has had over the last 40 years, progress has been slow. Social media, and the renewed interest in sharks with current generation of school-aged students is helping, however.

“Any time you can educate a person as to what that animal’s role is, it’s very valuable,” said Nagiewicz. “As an advocate for sharks, just as an advocate for seat belts a long time ago, you teach the kids the dangers and the safety side of things, and it’s a generational change.”

As a whole, sharks pose a relatively minor threat to human beings. According to data compiled by the Shark Research Institute, more humans are killed by cars colliding with deer, hippos charging the banks of rivers in Africa and even simple bee stings. And when a shark does bite a human, it is virtually always in error.

“When that animal bites you, to them, it’s something they don’t want to eat, and they spit it out and they move on,” Nagiewicz said. “Unfortunately, the human body isn’t built to take all those serrated teeth.”

The gruesome, and often sudden and clandestine, nature of shark attacks is equally scary.

“It’s mistaken identity, but at the same time, it scares the hell out of people,” said Nagiewicz.

For the environment, an ocean without sharks is an even scarier prospect, advocates say. With too few sharks at the top of the food web, populations of other fish species could grow out of control, ultimately putting enormous pressure on their food sources and disrupting the entire balance of the marine ecosystem.

“If we took all the sharks out of the environment, the ocean could also become overburdened with baitfish which could remove the oxygen,” said Nagiewicz. “An ocean without sharks would be the same thing as the forest without bears or another predator that keeps everything in check. ”

Nagiewicz, who is also a biology teacher at Atlantic City High School, suggests beach communities increase the use of drones to detect sharks from the air, and take steps to limit bathing near fishing piers where anglers are actively baiting fish. Though shark bites are rare in New Jersey waters, anglers often hook sharks while surf fishing, and one of the most significant breeding grounds for great whites is far offshore from Sandy Hook. Limiting the number of negative encounters between humans and sharks will ultimately lead to a better image for the species, the logic states.

“As long as people get into the water, people are going to get accidentally bitten by sharks,” Nagiewicz said, and between warmer water being found closer to shore due to changing ocean currents, and conservation efforts leading to larger baitfish populations, interactions between humans and sharks are a natural consequence. Still, Nagiewicz argues, sharks are in need of a helping hand, and as he learned from diving wrecks off the Jersey Shore, sharks aren’t the enemy after all.

“As time went on, I saw that when you see a shark underwater, it’s not there to eat you,” said Nagiewicz. “I guess I’ve always rooted for the underdogs, and sharks are clearly underdogs with people.”