N.J. Anglers Facing Possibility Fluke Quota Will Be Nearly Cut in Half 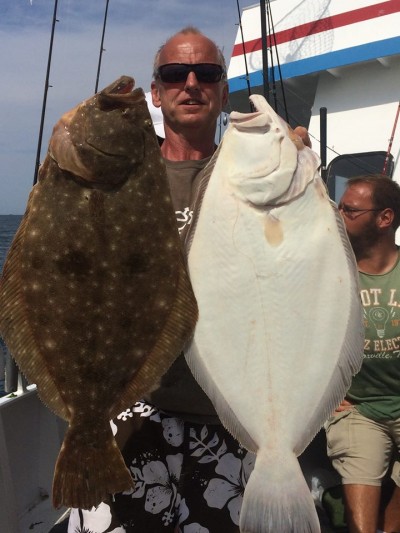 An anglers on the Jamaica II out of Brielle shows off two monster fluke caught on board the party boat. (Photo: Jamaica II)

A meeting to be held later this month could have dire consequences for the Jersey Shore’s recreational fishing industry, as the Mid-Atlantic Fishery Management Council will consider whether to recommend a 43 percent cut to the summer flounder quota.

In a memorandum obtained by Shorebeat, Chris Moore, Executive Director of the council, said his agency’s staff is recommending the acceptable biological catch for summer flounder – commonly known as fluke – will be 12.6 million pounds for the 2016 fishing season, divided between commercial and recreational anglers. This year’s fluke quota is about 22 million pounds.


Fluke regulations at the Jersey Shore have been the source of controversy for a number of years, as anglers have seen the minimum size limit for the species increase to 18 inches and the open season get smaller and smaller. The result has been fewer anglers willing to pay a fare on party and charter boats, and a general lack of participation that has affected the bottom line of bait shops, marinas and the businesses that are indirectly supported by the recreational industry.

The latest slashing of summer flounder comes as data from the federal government shows the species – ironically – thriving at some of the highest levels since data has been kept on the fishery. The proposed cuts in quota are due to that fact that over the past two fishing seasons, the projected fishing mortality rates have been exceeded and projected spawning stock biomass has not been achieved. In layman’s terms, a large size limit has caused too many fish to die after being thrown back, with a secondary issue being the fact that recruitment – the number of new, young fish that enter a population – has been lower than projected.

“The update shows that recruitment of age 0 [zero] fish was below average for each of the four year classes from 2010 to 2013,” the memo said.

The memo states that, as part of a three-year plan, the summer flounder quota should rise to 15.2 million pounds in 2017 and 18.12 million pounds in 2018 – still a far cry from the 22 million pound limit of 2015. The memo does not recommend how the drop in quota will translate in terms of fisheries regulations. Under management policy, the federal government allows state agencies to come up with a combination of size limits, bag limits and season lengths that achieve the mandated quota.

The council’s Summer Flounder, Scup, and Black Sea Bass Monitoring Committee Meeting will meet to decide on the recommendation July 23 and 24 in Baltimore.