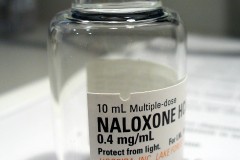 Prosecutors in Ocean and Monmouth counties on Wednesday jointly announced a program that will keep police officers in possession of Narcan, a drug which reverses opiate drug overdoses, after their supplies are used on a patient.

Narcan, also known as naloxone, has been used 142 times to revive patients overdosing on heroin or prescription painkillers so far in 2015, officials said following a press conference. When the Narcan program was first started in Ocean County in 2014, doses of the drug were funded with money seized from criminal activity, but that type of expenditure on a recurring basis is prohibited by law. That prompted the partnership with local hospitals.


“This partnership highlights the importance of our first responders, and will keep every officer equipped with the naloxone that has proven itself as an important weapon in our fight against these deadly overdoses,” Coronato said. “We are grateful they are joining law enforcement, helping ensure lives are saved, and keeping those officers armed and at the ready to aid an overdose victim.”

A comparison of the number of heroin or prescription opiate deaths to the number of naloxone deployments shows what officials called a “chilling reality for the pervasiveness of the epidemic.”

Since April 2014, law enforcement officers in Monmouth and Ocean counties responded to no less than 468 opiate-related overdoses with a slightly better than 90 percent success rate. For those who have been treated with naloxone because of a heroin or prescription opiate overdose, the average age is 33 years old, with an age range from 15 to 78.

Naloxone is administered using a nasal spray that gradually revives an overdose victim to allow for transport to a local hospital.