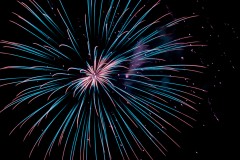 If you went to the Seaside Heights boardwalk Saturday night expecting to see fireworks, here’s why they did not go off as planned: the display was positioned closer to the ocean than usual to satisfy state regulations on how far fireworks must be shot off from spectators.

According to Borough Administrator Christopher Vaz, an unexpected wave drenched the fireworks before they could be set off, preventing the entire show from going on.

“Unfortunately, the tide was higher and rougher than usual tonight and the fireworks were swamped by a wave that made it up to the 110-foot mark,” Vaz said in a social media post. “Every fireworks event after Sandy has been a challenge because of the consequences of beach erosion.”


A range of opinions populated Facebook Saturday night after the non-event.

“Maybe it’s time to move the fireworks set up to a barge just past the waves,” said Wendy Maikisch Heck. “I’ve seen other towns who do it and it can be very successful.”

Other Ocean County communities, such as Beach Haven, host their displays over Barnegat Bay.

“Let’s keep in mind all the good the town does and how hard people work to make these events happen,” said Jenn Caroleo Santana. “I’m sure they are just as upset! Cheer up!”

There was no word if or when the fireworks display would be rescheduled.