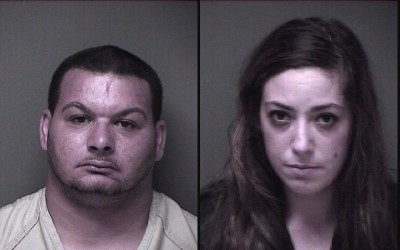 A surveillance operation conducted by the Toms River Police Department’s Special Enforcement Team on a Barnegat man resulted in the seizure of over 400 doses of heroin, plus crack cocaine, police said.

The drugs were found after police stopped Edward Boyer, 33, the target of the investigation, said police spokesman Ralph Stocco.

After observing Boyer conduct what appeared to be a drug transaction, a motor vehicle stop was conducted on his vehicle, Stocco said. During the course of the investigation, officers located approximately eight bricks – 402 wax folds – containing heroin,  five grams of crack cocaine and $812 in US currency.

The passenger in Boyer’s vehicle, Lisamarie Narciso, 23, of Seaside Heights, was placed under arrest for an outstanding warrant, Stocco said. Upon being transported to the Ocean County Jail, she was found to be in possession of 20 wax folds containing suspected heroin, which was concealed on her person. She remains incarcerated in the Ocean County Jail.