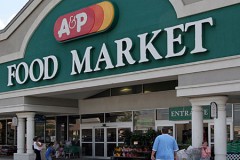 The owner of the Brick Plaza shopping center has bought out the lease of the store space being occupied by the bankrupt A&P supermarket for $1.4 million, according to bankruptcy filings.

The Brick store will shed 80 jobs this Thanksgiving Day, according to filings with the state Department of Labor and Workforce Development, signaling its potential closure, though no definitive closing date for the store has been announced. Federal Realty did not respond to a request for comment.


A&P filed for bankruptcy in July, announcing all of its stores would either be sold or closed. Acme Markets has announced the acquisition of two of the company’s Ocean County stores – an A&P location in the Ortley Beach section of Toms River and a Super Fresh supermarket in Manahawkin. Last week, the company revealed that Wakefern Corporation, the owner of the Shop Rite chain of stores, and ethnic food store operator Food Bazaar had bid on some of the stores in New York, North Jersey and Pennsylvania, though Brick was not included in either of those deals, presumably spurring the Federal deal.