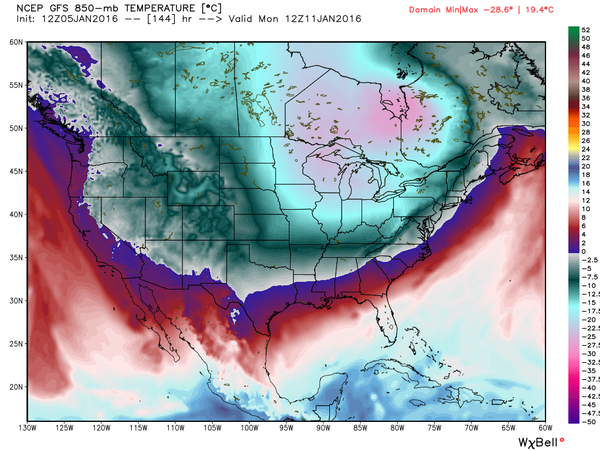 Cooler air from Canada will begin to plunge south on Monday. (Photo: NWS)

When it comes to weather forecasts, there are no guarantees – but after some warming over the coming weekend, a shot of cold, Canadian air is set to invade the region just as the potential for a stormy weather pattern also shapes up.

Whether the two factors will come together to produce snow is unknown, but a few shots are lining up over the next two weeks, forecasters say.

High temperatures will rise to 50 on Saturday and reach 56 on Sunday (though rain is forecast) in the Shore area, according to the National Weather Service. By Monday, cooler air will begin to move in, with overnight lows dipping to the 20s.


“I see a chance for some light snow or snow showers on Wednesday as a fast moving system passes by and develops more once its on its way out to sea,” Press of Atlantic City meteorologist Dan Skeldon said on social media Thursday. “Nothing major, but a few flakes are possible.”

It’s next weekend – the 16th and 17th – that have meteorologist thinking something larger could be brewing. A coastal disturbance may be off New Jersey and, depending on factors including the position of the jet stream and the course of storms moving through the midwest, precipitation could affect our area. Snow is “far from a guarantee,” Skeldon said, but it’s a time period for snow lovers to watch.